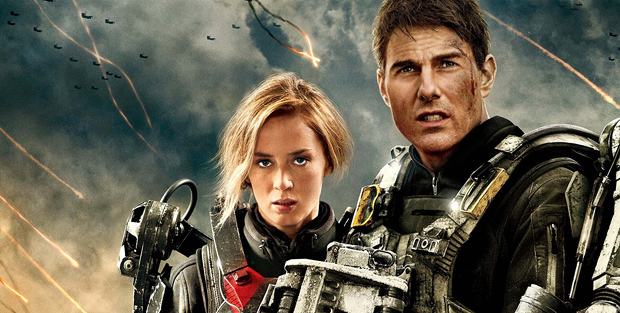 I finally watched the DVD I bought on sale almost three years ago. This is why I prefer to rent movies – if I have a fixed deadline ahead I’ll make time to watch them rather than procrastinate and let the box collect dust. There are just way too many other distractions around. I’m glad I freed it from the plastic wrapping, because the movie was a blast.

The easiest way to describe the movie is Groundhog Day meets alien invasion. In the intro, Earth is overrun by the swarm of extraterrestrial octopod-like beings known as Mimics; seemingly unstoppable, they decimate their way through poor old Europe, until humans score one solid victory over their enemy at Verdun. Tom Cruise is Major William Cage, a public relations officer with zero experience in combat, who is told, to his utter dismay, that he’s getting sent into the thick of what’s basically an alien D-Day to cover the big-scale invasion of France. When he tries to wriggle out of it, he’s disgraced and sent to the frontline anyway as a deserter… where he promptly dies on the battlefield. But this is not the end, as the next second he wakes up to relive his arrival at the army base and the disastrous battle on the beach. Like Bill Murray’s character in Groundhog Day, Cage retains the memories of his past repeated days, but everyone else around him is oblivious and keeps on running in the same loop, saying and doing exactly same things.

Cage finds no success trying to convince the people in charge that the invasion is doomed. Pretty soon, he figures out that his only allies in the whole mess are Sergeant Rita Vrataski (Emily Blunt), a fabled super-soldier who’s experienced the same time loop phenomenon in the past, and a scientist (Noah Taylor) who believes that the aliens are unbeatable because of their mastery of time. The whole time manipulation “science” is frankly muddy and nonsensical, but whatever, I rolled with it and was happy to switch off my mental plot hole-o-meter. With Rita’s help, Cage greatly improves his combat skills, and together they try to figure out the way to beat the aliens for good.

The nicest surprise of the movie is how fun and playful it is. I could easily imagine a version of the story which is a total depressing glumfest that takes itself way too seriously, but Doug Liman’s movie has a lightness that never undercuts the brutality of combat, the high stakes or the seriousness of the threat. Part of the fun is watching Tom Cruise play a character who is, initially, a sweating wuss way over his head, and a complete opposite to his typical square-jawed heroes. There’s also a lot of dark humour found in the time loop situation, when Rita puts a bullet in Cage’s head any time he messes up his training because hey, you can just restart the whole thing and get it right this time. The well-balanced script doles out the information to the viewer at just the right moments, and never lets things get repetitive in a dull way.

While this is Tom Cruise’s vehicle through and through – and he’s fantastic here – the movie is still generous to the supporting characters, particularly Blunt’s fearless, tough-as-nails Rita. When I first watched her in Devil Wears Prada, I never imagined that she’d make a kickass action flick heroine down the line too. My only complaint is that the movie can’t help but superimpose a clichéd kiss onto Cage and Rita’s comrades-in-arms relationship, which gets a pass I guess because of the circumstances but still, it just felt unnecessary. Brian Gleeson manages to find some nuance in the rather stock character of the general in charge of the invasion, and the rest of Cage’s loser squad are much more memorable than your typical action movie side characters.

Apparently there’s a sequel in the works. It’s a bit hard to see how the Groundhog Day scenario can successfully work twice (thank god nobody had a dumb idea of a sequel to that movie), but you never know I guess. I loved the characters and the world in this one, if they made it work again I’d be thrilled.