I used the Open Ground spell to enter the Catacombs, and tiptoed by the skeleton warrior at the door. Pagan monsters freak me out in the way Ultima 7’s creatures rarely did; ghouls and changelings are more a nuisance than genuine threats, but ghosts, skeletons, daemons, giant spiders and seekers (giant eyeballs with mouths)? Aaaaah get me out of here quick.

It must count for something to have played this game over and over; I couldn’t really remember the way around the Catacombs, except that to reach the next stage you have to fall through the floor, but I found the right spot with minimum wandering. The previous Ultimas pretty much condition you to search every dead body you find in the dungeons, but I had to fight the habit here, since checking every single pile of bones would have taken me all day.

Very soon, I was speaking with my first Necromancer: 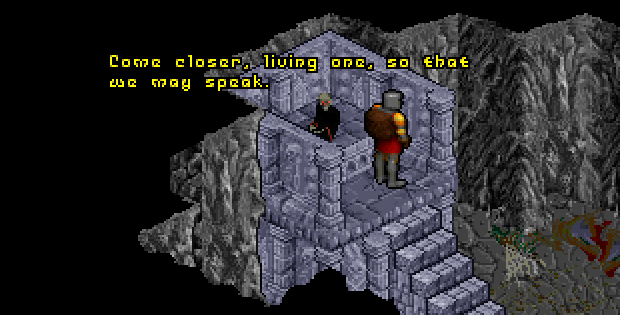 He taught me the Mask of Death spell, which makes you appear near-dead… but I progressed without it by simply running past a bunch of daemons. Some of the spells you learn from the Necromancers are rather pointless, while others are essential, such as Rock Flesh which you absolutely have to cast in order to survive a corridor where you get repeatedly struck by a lightning. Grant Peace is another nifty spell I prepare in bulk, to take care of skeletons and ghosts in a tight corner. I also found a magic armour, which I collected after falling through the hole in the ground on the first attempt. Avatar’s last cry as he plummets to his death is pretty hilarious.

The last Necromancer taught me the Summon Golem spell, and after that I was back in the Catacombs.

It took me a while to find the door to the Stone Cove; I tried every other Titan door first. I explored the steps in the water and came first to a small island with a dead body and a small bag… with fish in it. Well that was anti-climactic, but nevermind, there was another small island further ahead with a cool magic axe named Deceiver. 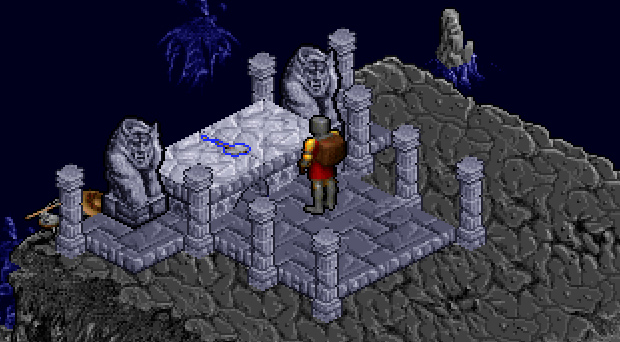 Back on dry land, I created my first Golem, who opened the two doors in the Cove by… growling at them?

Praise Jesus, those infuriating flying platforms are stationary in this version of the game. Overall I didn’t hate jumping in the original Ultima VIII as much as others did, but oh my the moving platforms and the jumps of death.

I’m pretty sure you’re supposed to figure out your way around the area with magical blue walls by throwing mushrooms to find a safe direction, but I’ve no patience for that, so I just charged through the walls like a bull and restored my life points with the red potions. At the end of the passageway, there’s a chest with the key you need to progress further, and a gem which is called, I kid you not, a “blue field passage gem”. This blatant hand-holding makes me roll my eyes; previous Ultimas surely would have left it up to you to figure this out. On a similar note, I resent the fact that you can’t kill off crucial characters like Devon in this game. You went on a mindless murder rampage and now you can’t finish the game? Well tough.

Finally, I made it to the Hall of the Mountain King, and had an audience with Lithos, who told me that I must inter Lothian. For some reason, Lithos’ line, the scent of her rotting flesh shall perfume my garden of delight always cracked me up. Overall he’s a giant asshole and surely Pagan is better off without him.

I activated the platform for the Hall of the Mountain King, and returned to the Cemetery, where Vividos praised my efforts and gave me the Key of the Scion. After I interred Lothian (surprisingly easy considering how significant everyone made it out to be), Vividos officially named me his Scion and told me to go on a pilgrimage to the birthplace of Moriens, the first Necromancer.

I paid a visit to Mythran for a useless Theurgy lesson no. 2, then travelled to the valley and prodded the local farmers further about the valley ghost. The way conversations branch out in the game can be frustrating – you can miss out on an entire thread if you don’t say the right thing or trigger the right topic which can then disappear from the dialogue options altogether. I then talked to Kilandra about the ghost, and after a fair amount of trial and error she told me that the key to the ghost is kept in her daughter’s grave, who she also chats to on occasions. I found the grave of Elaina in the Cemetery, and her ghost popped out and threw the key on the ground.

Not much of a security system when she didn’t even ask me who the heck I was; Kilandra might need to have a chat with her daughter about strangers.