My companions all scattered while I was in prison; Dupre of course went to drink his sorrows away at the Blue Boar and Iolo somehow got to be the guest of Gustacio, who previously wouldn’t deign to talk to a mage let alone a Mundane. Boydon hooked up with Bucia – I guess love is blind and doesn’t have a sense of smell? Finally, I found Shamino in the woods south of the city, and he passed me a few valuable gifts from Frigidazzi – an apology note, Chill spell that will help you survive the Furnace, and Serpent Earrings. The minute I put them on, I got contacted by the Great Earth Serpent; first time it happened it scared the bejesus out of me.

I stole the Comb of Beauty from Columna, who had stolen it from the ruler of Fawn, which made her beauty wither and now she looks just like her sister Mosh the crazy rat lady. Considering the efforts I went to in order to get the Helm of Courage and the Rose of Love, this was no effort at all.

While I was away, poor Mortegro got hit by a lightning and switched places with a stone altar from an Ophidian temple, which you find in Gustacio’s basement. Gustacio is much more friendly now that I beat the Dungeon Freedom, and offers  spells for free, in return for aid in his experiments (did I say before that things run in pairs in this game?) You have to travel north of the city to a weird construction which artificially summons a magical storm and you can get a lightning on demand with a lever… which makes little sense but anyway. 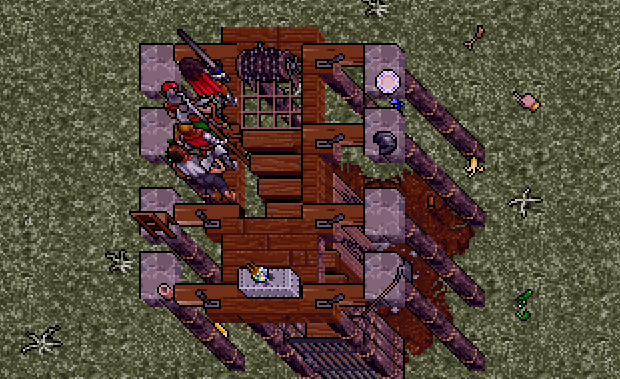 I’m supposed to observe the colour of the lightning and what it does to an object; I’m not sure though how you can tell if a struck object switched places with another object, or if the lightning simply transformed it into something else, as Gustacio speculated. But he seems happy enough with the findings and sends you to Fedabiblio, who suggests you look into his crystal ball for the clue to Edrin’s fate, a vision that conveniently shows up just when you need it? Again, this doesn’t make much sense. In any case, I dragged the caged Ale the parrot and a brand new energy globe to the construction, where Edrin was restored to his real shape. I guess it was a risk taking a chance that Edrin got hit by the right kind of lightning and didn’t swap places with a pumpkin instead or something.

On my way back, I stumbled on this temple of the Great Spider or whatever the hell this is: 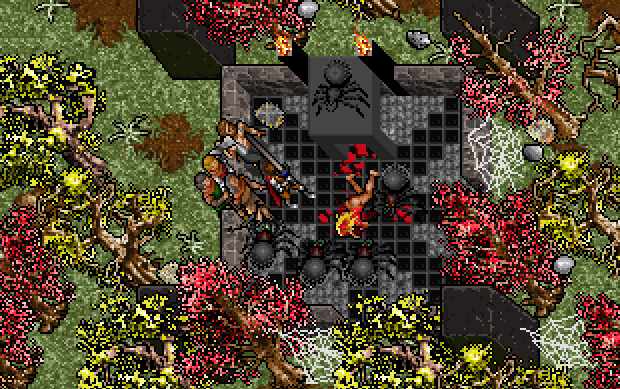 I got a bunch of free spells from Gustacio, as well as the Mirror of Truth, which was never a part of the original bargain but thanks anyway. I got the key for the catacombs from Julia, the leader of Rangers, so now it’s time to take a long, long walk back to Monitor.

This underground city is weird; it supposedly has been populated by the gargoyles for several generations, but the only sign of their habitation is a few sleeping gargoyles here and there. No personal, lived-in Gargish touch anywhere, lots of empty buildings still full of cobwebs, skeletons and rubble that apparently no one ever bothered to clean up for centuries.

I met Zhelkas, the only gargoyle still awake after the sleeping disease took the rest, and apparently the only winged gargoyle around, too. 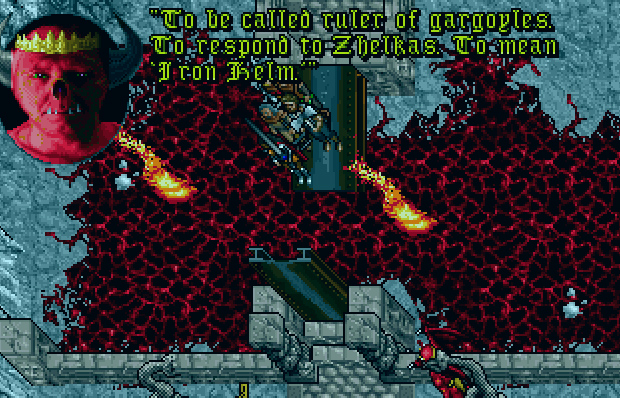 I gave Zhelkas a promise to take the Test of Purity, which amounted to three separate tests. In the first one, “Shamino” tries to convince you to use a bunch of random people as sex slaves by pressing a button, whereas the other button sets them free. By the way, why are there four women and only one guy? I demand an equal choice of sex slaves dammit! 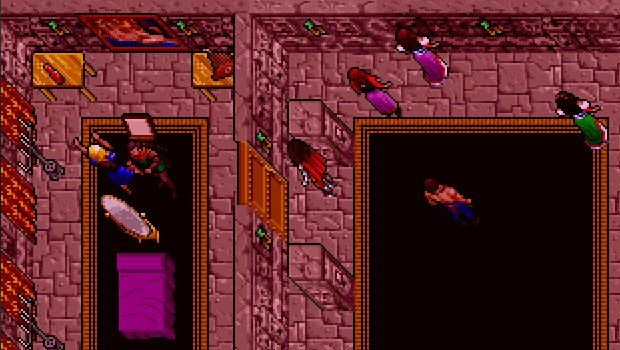 In the second, “Iolo” attempts to trick you into leaving through the Red Gate with him to thwart the Guardian menace on Earth. Is it me or are these ethical tests not very interesting? They don’t really give you any hard choices to make and as a player you know that duh, the game is not going to abruptly switch gears with you going back home. The only test that feels like real effort is the last one, where you’re supposed to kill ten giant worms with a hammer while “Dupre” tries to distract you with tales of treasures he just found. Trying to aim at those writhing parasites is a test of patience for sure.

On the completion of the test, Zhelkas gave me the Serpent Ring, which prompted a few more jump scare appearances from the Great Earth Serpent. I also found another serpent tooth in the area with the weird sparkly mushrooms, and an everlasting goblet in the abandoned banquet hall. This city seems to provoke more reactions from my companions than usual, who freak out over the cursed bones and snakes:

To be fair, this place is indeed infested with snakes that got me poisoned at least twice.

Zhelkas graciously opened the brass gate for us with his superior gargoyle strength, and we got to travel through the territory of the trolls who dwell in the adjoining tunnels. I located the Serpent Staff and found the burnt remains of my original spellbook, which explodes and disintegrates if you prod it too much.

Back in the good old Monitor, I spent a small fortune training everyone up, despite the snooty knight in charge of the List Field who constantly judges your weapon choices (spears and halberds are for cowards and mace is for the squeamish losers who can’t handle a morning star).