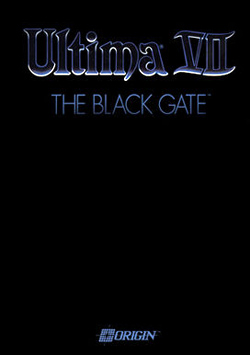 I think it was 1993; my parents both worked in IT and I was one of the few people in my class to have a personal computer at home, which I shared with my siblings in a fierce competition; to avoid fighting we eventually came up with a rule where no one could play for longer than two hours at a time.

Ultima VII: The Black Gate felt special right from the start: the ominous intro with the scary red-faced bad guy, the murder mystery, the interactive world the likes of which I’ve never seen before. One tiny problem though – because I lacked all supporting materials and access to the internet, I couldn’t pass the test granting password to the gates of Trinsic. Oops.

I think it says something about how hooked I was even on this tiny sliver of the game that I didn’t just say “screw this” and moved on; instead I spent many frustrated months restarting the game over and over. I even had a rather insane idea of working my way through every possible answer combination (0, 0, 5; 0, 0, 10 and so on), but naturally I gave up on this pretty soon. My poor Avatar succumbed to the cabin fever and completely lost his marbles; on one replay he went on a murderous spree killing everybody in Trinsic, and on another he re-decorated the entire town. Eventually, to save me from my misery, my Dad got me the full game which finally let me out of Trinsic. Oh man the joyful feeling I had, with the whole Britannia laid out before me to explore.

Ultima VII: The Black Gate remains my favourite Ultima. I’ll grant that Serpent Isle has a more intricate and sophisticated plot and does a few other things better, but if you ask me which world I prefer to spend time in, I’ll go with Britannia.