Once inside the Enclave, I was welcomed by Beren, who informed me that the Daemon’s Crag is now accessible because some idiot has released the Water Titan. Even though you’re supposedly visiting the Sorcerers to deal with the Hydros situation, this is the only reference to Hydros you get in this entire section. I guess the Sorcerers are not that bothered by the crappy weather.

Sorcery is my favourite branch of magic in the game. It’s by far the most visually spectacular, it has an interesting and complicated system of reagents and candle positions, and the Cabal are a colourful back-stabbing bunch. First up I talked to Bane, the female Acolyte who told me that Vardion, the First Acolyte, is planning to assassinate Master Malchir. In exchange for making me her disciple, she orders me to find out Vardion’s Truename so that she can get a better read of his intentions (haha). Bane’s own Truename is Sabriane, which I’ve been using as my internet handle for years; I think it’s very pretty.

I listened to Beren’s story about the Guardian and the Destroyer, but I refrained from pointing out that his ancestors were duped and that the Guardian played a giant elaborate prank on them. I don’t quite get this part of Pagan’s backstory to be honest. Were the Titans ever in league with the Guardian, or did he just show up to fight them and then pretended to be defeated or something?

I then visited Vardion, who accused Bane of the same treachery, and ordered me to learn her Truename. They’re both devious scumbags, but I usually side with Bane; I like Mordra in The Black Gate but I just don’t want to team up with her boorish grandson, I’d rather take Bane’s fake niceness. She then summons a daemon, who tears Vardion limb to limb offscreen. I don’t know if it’s deliberate, but straight after Vardion’s screams end the Guardian repeats one of his Pagan catchphrases, I do so enjoy the cries of torment. 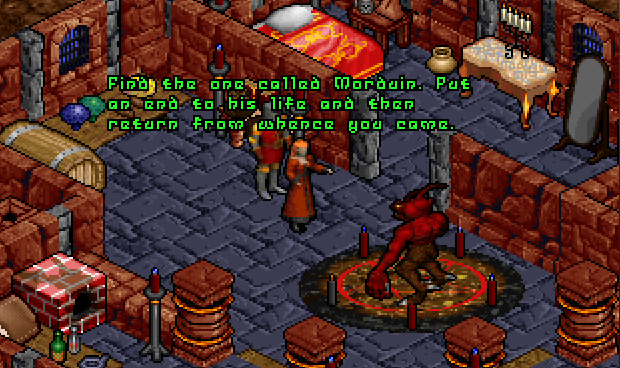 Malchir then appears in Bane’s quarters; I prefer to think that if he had a voice, he’d sound just like Emperor Palpatine. He’s not pleased with the loss of an Acolyte, but Bane reassures him that she’ll have me trained up in no time.

I then went to the Library, where I found magic leggings and stocked up on candles and reagents. There’s also a Disciple hanging around the place telling a joke about a Theurgist and a torax, but then he forgets the punchline.

While I do love Sorcery, the painstaking positioning of candles and reagents on the pentagram for every spell can get annoying. Luckily I had scribbled all over my Pagan manual on my previous plays, but even with the detailed instructions, I couldn’t get the Endure Heat enchantment to work during Bane’s test. It got so frustrating I just started the test over and this time it worked fine. Pleased with my progress, Bane sent me to the Obsidian Fortress.

Malchir welcomes you at the entrance and summons a couple of daemons as your first test, but you can just run past them through the doors.

I met my old pal Arcadion, the daemon Sorcerer in this game, who didn’t recognise me. He hinted that difference in time between the worlds could be the reason; I tried to figure out how he, Mordra and the Forest Master all fit into the multi-world timeline but then my brain gave up.

I was so taken with the mystery of Arcadion, I had a half-finished fanfic where I tried to imagine his origins and a possibility that he might have been human once. Since the daemons on Pagan are basically people who were either consumed by flames or killed by another daemon.

I spent some time preparing spells necessary to pass the tests ahead, then teleported to the monster-infested test area, where you need to collect four symbols to pass. The first corridor leads you to an area full of red explosive mushrooms; in theory you could pass it without the Flash spell, but you’d need to stop and heal yourself a lot. Just as I collected the symbol, a seeker showed up, so I summoned a daemon to beat the shit out of him. It’s a fun fight to watch and in the end seeker explodes and leaks some weird green bubbles.

The second corridor tests your skill with Armor of Flames, as you’re bombarded with fire blasts. At some point the spell wears off, so you need to time it well. Despite the challenge, I managed to retrieve the magic shield along with the symbol.

The third area is heavily populated by the minions of Lithos – ghouls, skeletal warriors and ghosts – and requires the use of Endure Heat spell, which enables you to walk on solid lava. How cool would this spell be in real life? There’s also a neat magic armour to be found.

The first three areas were quite hard to get through and I died repeatedly, so it was a surprise to find out that the last area is so easy by comparison – you just need to use the Extinguish spell on the candles to douse the giant flames protecting the symbol and the magic helmet. The only tense moment happened when a troll walked into the cave, but I summoned a daemon to beat him up.

Once I collected all four symbols, Arcadion told me to proceed to Master Malchir, where yet more spell tests awaited. After that, all was ready for the Ritual of Flame.

The summoning of Pyros is a showy sequence, it’s no wonder that Ultima IX recreated it with a superior animation. I’m not really sure what interest Malchir has in the sun – was he hoping to channel more power from it? I also can’t see why Pyros wouldn’t know about the sun, as he was around at the time before the eternal twilight, so he was probably denying its existence out of vanity. Malchir’s demand for more power angered Pyros, but the Cabal managed to banish him. 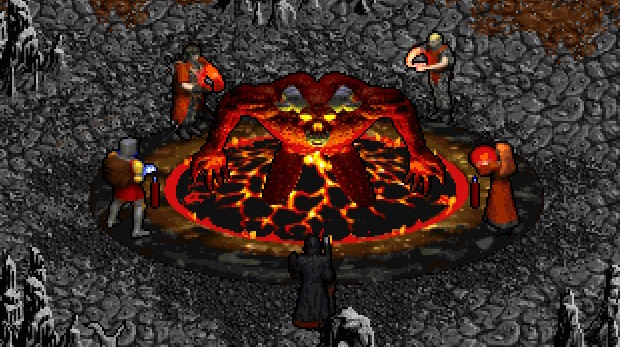 I then returned to the Obsidian Fortress, and defeated Malchir in a duel which proves that magic is no match for mindless hacking and slashing. That circle of flames sure was useful *sarcasm*.

I retrieved the Tongue of Flame and magic arm guards from Malchir’s dead body, so now I’m Master Sorcerer and everyone at the Enclave is bowing and scraping before me. Little do they know that their school of magic is about to die off. I’m actually not sure if it’s compulsory to release Pyros in the game, but I did it anyway, by bringing the Tongue of Flame inside the giant pentagram. Now Pagan is getting pummelled by both Hydros and Pyros.