Back in Skullcrusher, I disabled the force field with the spell Selina so conveniently happened to have on her, and retrieved the Gwani Horn. I used the ice raft again to find the Gwani Death Temple, but there was no polite way of freeing Gwenno from the ice without desecrating other Gwani burial pillars… oh well. The musical theme playing in the temple is very lovely and one of my favourites in the game.

On the way back, I found the island of killer penguins where my Magebane ended up, but I always found it an overrated weapon. Penguins can have it! 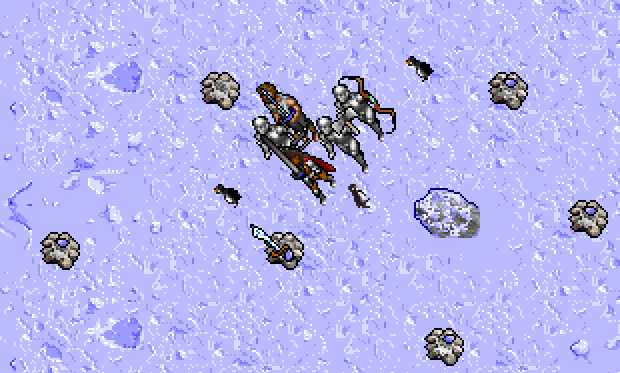 At Monk Isle, newly resurrected Gwenno wasn’t quite herself, spouting stuff like Let me feel thy naked flesh! which is a tad awkward coming from the wife of your companion. Young Cantra was also at the monastery, doomed to have her brains scrambled forever because of the game bug, which is rather sad. In order to heal Gwenno, Karnax sent me to get the Scroll of the Serpent from Fedabiblio.

Post-apocalyptic Moonshade fares by far the best of all the cities, since it’s the only one with a significant amount of plot still happening. The surviving citizens’ dialogues don’t always sound up to date, but at least they do actually refer to the recent events and Shamino the Anarch’s homicidal shenanigans. I spent time raiding the empty mansions and collecting serpent teeth, and for some weird reason Ale the parrot was back flapping around Gustacio’s mansion. In Hawk’s room at the Blue Boar, I also found the map to the Serpent Crown.

Poor Fedabiblio got into Shamino’s way and was turned into a stone statue, but I brought him back to life with Torrissio’s Philanderer’s Friend wand. I could never understand the wand’s name: was it nicknamed so because it’s useful for turning angry husbands into stone statues when they happened to catch you in flagrante delicto? Fedabiblio gave me the Scroll of the Serpent – an exact copy of the scroll I found in the secret cave at the very start of the game.

Stefano, meanwhile, was in big trouble, pursued by the Death Knight that Columna had sent upon him before her demise. In return for my bodyguard services, he promised to restore to me my own possession that got lost in the magical storm, which is not exactly ethical but whatever. My first attempt at bodyguarding was a complete disaster, with Stefano dying in the fray, but eventually I dispatched the Knight and got the key to Stefano’s storeroom, where I recovered my black order serpent. 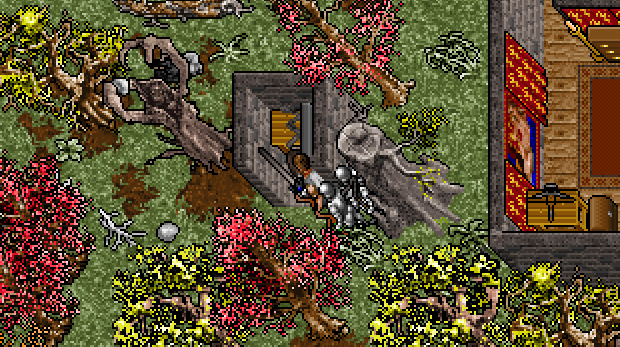 So according to the Ophidian chart, Gwenno and Dupre are somewhat lacking in discipline, Iolo lacks logic and Shamino could be a bit more ethical.

At the temple, I found the remains of the bane jail, and automatons who babble nonsense. There were also a few interesting books around the place, including the one detailing the creation of the Ultimate Warriors of Order. I’m guessing that these metal warriors is what had tipped the war in favour of Order?

The first time I played Serpent Isle, I missed out completely on the meaning of the bodyswap vision you see on Monk Isle, and got past the acid test in the excruciatingly slow and tedious way, by healing myself repeatedly after every step. But now I did it right, by returning to Moonshade and asking Petra the automaton for help. She was intrigued to discover what it feels like to be human, even for a while, so she joined my team; I usually keep her around until I get to recover my companions.

How very convenient that the Ophidians put the bodyswapping mechanism in the exact same temple where one might need an automaton body, eh? Because by the sounds of it, you’re meant to overcome the acid with the power of your mind, man.

I made sure to fill two buckets with the water of Discipline, since you also need it to restore Dupre later on and while bodyswapping is fun I don’t feel like doing it twice. Out of curiosity, I tried to destroy Petra-in-human-shape to see if I could keep her metal body forever, but it didn’t work.

After Gwenno was healed by the water and came back to her senses, she sent me back to Moonshade to find out how to construct the cages for Banes. Torrissio, who is now the self-proclaimed MageLord and lives in Filbercio’s former palace (even though Ernesto the ranger mentions Shamino as the acting MageLord), gave me the Soul Prism spell in exchange for the Philanderer’s Friend. Ducio constructed Worm Gems for me, which the spell would shape into prisms, but before I could talk to him I had to slaughter my way through a bunch of crocodiles. I’m not sure why Moonshade is overrun with wild animals all of a sudden; did the Rangers used to keep them off?

Back at the monastery, Gwenno informed me that the soul cages need to be bathed in water of the temples connected to the Banes, so it’s time to put on my Indiana Jones fedora and go exploring.