Wow I forgot how short this game is once you know how to pass the dungeons. Now that I have the obelisk tip and the Tongue of Flame, it’s time to collect the rest of the obelisk fragments.

I got my last Thaumaturgy lesson from Mythran, who sold me the Ethereal Travel spell. The only other spell is Devastation, which supposedly wipes out all life on Pagan; one time I decided to actually raise 1000 obsidian coins you need to buy the spell, but the end result was incredibly underwhelming.

I got the Tear of Seas from Devon, who had conveniently fished it out of the ocean years ago. He also offered me Salkind’s empty mansion to use as accommodation while in Tenebrae, a nice gesture I suppose if rather redundant.

At the Argentrock Isle, I hopped back to Stratos’ dwelling and used the Aerial Servant to steal the Breath of Wind. 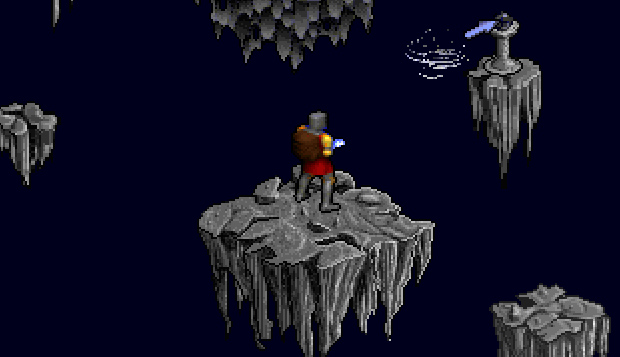 The collapse of Theurgy was met with mixed responses back at the Monastery: Xavier is angry, Stellos gently reminds you of the price of severing the healing link to Stratos before collapsing into a heap of dust, and Cyrrus is happy to return to Tenebrae and marry Jenna (it’s a real shame you can’t witness his proposal, knowing Jenna it’s not likely to end well).

Finally I retrieved the Heart of Earth from the Pit of Death… but I couldn’t leave Pagan without getting an answer to a burning question: who would win in a fight between a daemon and a golem?

Well colour me surprised, because I was expecting the golem to come on top, but no, he got totally owned by the daemon and collapsed into dirt chunks.

This solved, I bade farewell to the island of Morgaelin and departed to the Ethereal Plane.

Blue tiles and organ music ahoy! To re-create the obelisk, effectively a Black Gate, I had to travel to each Titan’s domain and drain them of their power by… clicking at them with the relevant blackrock piece. Not much of an epic fight.

Pyros’ lair is pretty much the only Titan area with a touch of imagination, and care given to the design of Pyros’ lava cauldron or whatever it is he resides in. The most intriguing detail is a journal by someone named Robin Dudley; from his scribblings, he sounds like a 19-century Earth gentleman who had somehow ended up in this hell hole. Another notable feature of the domain is the creepy area just before you encounter Pyros, with the horribly mutilated human bodies, including one of a child that Avatar attempts to say hello to if you click on it. Pyros was not too happy to see me, and his daemon cronies managed to maul me quite a bit before I vanquished their master. 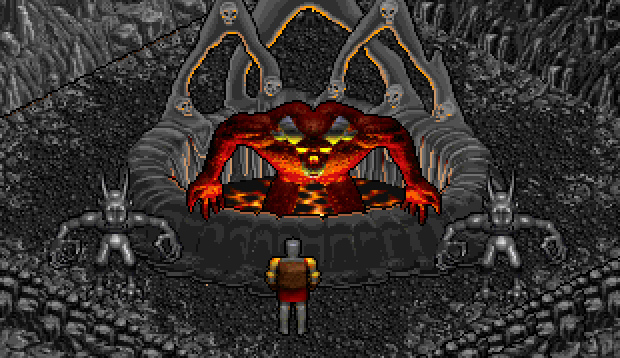 The lairs of Hydros, Stratos and Lithos are unfortunately dull and unimaginative and contain nothing that you haven’t seen before: more corridors with earthquakes, more rocks in the water or floating in the air.

I used the obelisk tip on myself, but before I could recreate the Black Gate I had to stop and take care of the annoying changelings… what are these critters doing in the Ethereal Plane anyway? Oh and how embarrassing would it be for Avatar to become a Titan of Ether and then die from changeling bites?

This is the end! Avatar undergoes yet another mysterious costume change, and walks very slowly across some weird silver plane, before facing the horrible reality: a land in ruins under a blood-red sky, with a giant stone visage of the Guardian towering over all and his mocking laughter ringing in your ears. Back when I first finished the game, I found this downer of an ending very powerful.

But nevermind all that, next thing you know, you wake up in your own bed on Earth… ugh trying hard not to start on the angry Ultima IX rant.

Well this is it for playing and blogging through Ultima VII and VIII. It’s been a fun project and it has re-affirmed my undying love for these games. If you’ve been following the adventures of the Blogging Avatar, thank you for reading.