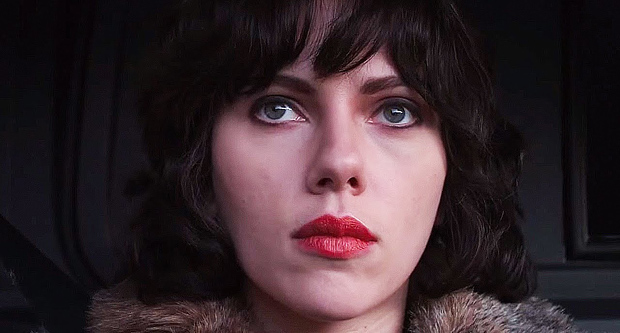 I can’t say if I “enjoyed” this artsy and perplexing sci-fi film in a conventional sense, but I always appreciate a unique movie and Under The Skin is certainly an original experience unlike anything I’ve seen before.

One thing to abandon with this movie is an expectation that at some point it will clearly explain things to the audience, because that’s not happening. Despite some dialogue it plays almost like a silent film and the images onscreen are open to interpretation. Broadly speaking, it’s about an alien being who roams around Scotland in a shape of a fetching young woman, luring men into a fatal mating ritual. Because she looks like Scarlett Johansson (with black hair, red lipstick and a sexy faux fur jacket), her success rate is pretty good, and once she’s alone with her bewitched victims who can’t believe their luck, they perish in a very striking and disturbing minimalist sequence. There’s also an unspoken connection between the woman and a mysterious man zipping around on a motorcycle, which is never explained; is he her handler, her partner, her owner? Is she his equal, his subordinate, or merely some sort of harvesting tool?

Scarlett Johansson is pitch-perfect in this otherworldly role and gives an erotically charged performance different to anything else I’ve seen from her. She’s absolutely mesmerising to follow even when nothing much is happening onscreen. There’s an intriguing contrast between her alien presence and the abstract imagery of the alien dimension, and the gritty everyday feel of her Scottish environment. The men she encounters are as ordinary as you can get (and most speak with thick Scottish accents that made me thankful for the subtitles), with one exception that marks a turning point in the story after which the woman finds herself in a far more vulnerable position.

We see her outsider perspective of the human beings, milling around the city streets and shopping centres; while she knows how to perform femininity and push the men’s buttons in order to attract them, one gets a sense that the actual human emotions are completely alien to her. There’s a chilling beach scene involving a failed rescue earlier in the film, in which she impassively watches the incomprehensible human drama happening in front of her eyes. Eventually, some kind of slow awakening takes place, as our alien heroine becomes entranced by her own shape and seems to wonder if there’s more to the human experience and the human creatures around her, though it’s hard to say whether she’s driven by curiosity alone or whether there’s a genuine pity and compassion at play.

Under The Skin is a sort of movie that’s all about texture and mood rather than a “story” in a traditional sense; it raises questions but resolutely refuses to give answers and its meditative pace won’t be everyone’s thing. It however got under my skin for sure, and the bleakly beautiful Scottish countryside is a bonus.