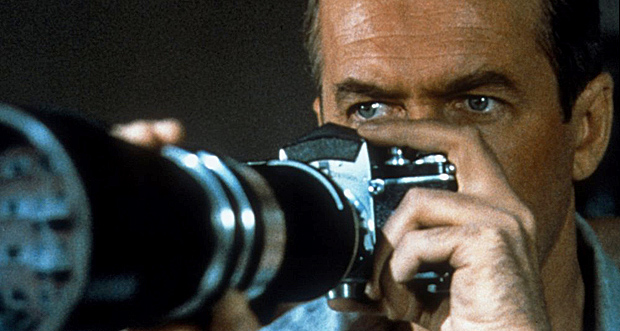 I’m not all that familiar with Hitchcock’s movies, even though his adaptation of Rebecca is one of my favourite films of all time, so I thought I’d watch this 1954 classic.

Rear Window is a brilliant exercise in limitation: its main character, famous photographer L.B. “Jeff” Jeffries (James Stewart), is immobilised throughout and the film never leaves the cramped apartment in Greenwich Village he resides in. Cooped up in sweltering heat with his leg in a heavy cast and bored out of his skull, Jeff’s only two dependable visitors are his no-nonsense nurse Stella (Thelma Ritter) and his coolly beautiful and sophisticated socialite girlfriend Lisa (Grace Kelly). Lisa wants commitment from Jeff, but he keeps her at arm’s length, dubious about their different lifestyles and social positions and marriage in general.

When alone, Jeff spends time watching the mundane mini-dramas of his neighbours, whose windows share the courtyard with his apartment’s (a storyline that would probably never appear in the modern day, when Jeff would likely have been glued to his mobile or Playstation instead). Until one day, he becomes convinced that Drama with capital “D” is happening in one of the apartments occupied by a travelling salesman named Thorvald and his bed-ridden wife. A heavy suitcase, a saw, husband who mysteriously comes in and out of the apartment during the night, and the missing wife all combine to make Jeff suspect murder.

The film is a marvellous example of visual storytelling; it never leaves Jeff’s perspective and the audience sees only as much as he does. I suspect that it’s probably even more rewarding on a second watch that would allow you to catch the details you might have missed first time around. Though it works as a riveting thriller, with a final confrontation that’s incredibly tense and unnerving, Rear Window is also a film about the thrill of voyeurism. Jeff’s character really couldn’t have had any other profession than photographer, a job that requires him to be on the outside, looking into the lives of strangers. But he’s not the only one seduced: in the beginning of the movie his nurse, ostensibly the voice of common sense and reason, sternly tells him off for being a Peeping Tom, but it’s not long before she herself becomes absorbed by the murder mystery. We all like a look in.

Jeff’s apartment block is also a display of love and marriage in its various shapes: there’s a lonely woman dubbed Miss Lonelyhearts who arranges elaborate dinner parties for imaginary admirers, a young Miss Torso who parties with several men at once; a newlywed couple who keep their window covered because they’re constantly at it; a bickering older couple who are evidently fed up with each other. After reflecting on the film afterwards, it’s remarkable how many simple little details stuck in my memory: a red glow of a cigar from Thorvald’s darkened apartment, a little dog lowered daily in a basket by their owners for a wander, a couple who are fond of chilling on a mattress spread on their balcony and must scramble to save it from rain. The only element that felt jarring to me was the frequent fade-to-black, which had fallen out of favour as a method of scene transition, especially in thrillers.