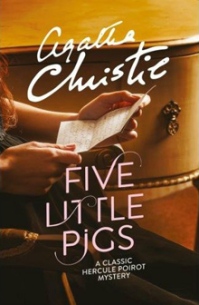 Now that I’m officially doing a Christie challenge I suspect I’m going to give preference to the novels that stuck in my head the most, and leave the least favourite or poorly remembered ones for last. This Poirot mystery is definitely up there with the best.

Our favourite Belgian detective is investigating a sixteen-year-old case on behalf of a young woman, Carla Lemarchant, whose mother Caroline was convicted for murdering her husband. Amyas Crale was a brilliant and egocentric painter with an appetite for affairs, and all evidence points to Caroline poisoning him when his latest passion turned serious enough for him to consider divorce. Years later, Carla receives a posthumous letter from her mother swearing her innocence, and now, her mind in turmoil, Carla wants Poirot to find the truth, whatever it might be.

Digging up a crime this distant means that all Poirot has to go by, outside of the official investigation, are the testimonies of the five people who were at the scene: Amyas’ lover who is also the subject of his last ever painting, a friend and his brother, Caroline’s younger half-sister and her governess. Whimsically, they make Poirot recall a children’s nursery rhyme about five little pigs. All are vastly different individuals with their own view of Caroline’s character and the tragic event – to some she’s a jealous and vindictive witch, to others she’s an epitome of nobility and goodness. The novel has a rigid structure, where Poirot first interviews each one of the five suspects, followed by their own written accounts of the crime, culminating in – what else – the drawing room explanation demonstrating the brilliance of Poirot’s “little grey cells”.

In the absence of immediate physical clues and the fresh scene to investigate, the psychology of the people involved and the seemingly minor but crucial details hidden in their testimonies are of utmost importance. This is Poirot at his most purely cerebral, and Christie’s characterisation (usually the least celebrated aspect of her writing) at its strongest. She put a lot of effort into making every suspect feel distinctive, and the way Poirot carefully calibrates the degree of his foreignness depending on who he approaches is pretty amusing.

With books like these, I always have to swallow scepticism about how much detail a normal person can really remember about the events and conversations that took place years and years ago, but it’s undeniably fun and satisfying to see Poirot arrive at the truth and elegantly piece it all together. The eventual reveal, and the true nature of the murder, is also one of Christie’s most memorable ones.