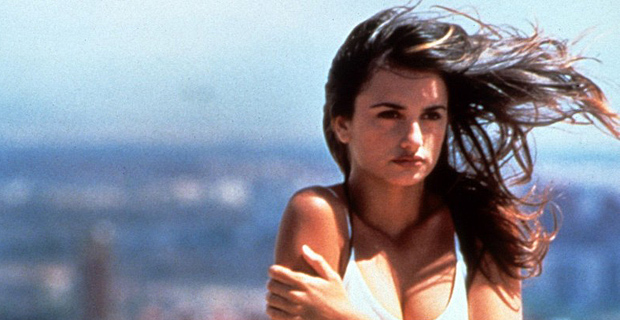 A mind-bending Spanish psychological thriller with Penelope Cruz, which later was remade as Vanilla Sky, an ill-received American version with Tom Cruise and, bizarrely, Penelope Cruz again. I’ve watched this in a rather groggy state of mind after a poor night’s sleep, and the movie’s twists and turns definitely perked up my brain by the end of it all.

Filmed in Madrid, the movie is a series of flashbacks telling the story of César (Eduardo Noriega), a young, handsome, successful businessman with a posh apartment who never spends a night twice with the same woman. That’s until his latest conquest, femme fatale-sque Nuria, doesn’t get the hint and attempts to crash his birthday party uninvited. In an effort to shake her off, César hits on Sofia (Penelope Cruz), his best friend’s date, spending a chaste night at her apartment (chaste because real love). Next morning, Nuria tempts him into her sexy red car with an offer he cannot refuse, then sends the car off the road, killing herself and leaving César horribly disfigured. His looks ruined, there’s little chance of taking the romance with Sofia further… or is there? Meanwhile, in the present day, César is locked up in a psychiatric prison, wearing an eerie prosthetic mask and accused of a murder he doesn’t remember committing.

This labyrinthine movie has great fun playing complicated games with the mind of its hero and the audience, tripping through César’s jumbled, confused memories and keeping us in a state of vertigo, guessing till the end. What is real and what is a dream? How much of César’s recollections can be trusted, and what does the final jigsaw puzzle look like? There’s a dash of sci-fi, a bit of The Phantom of the Opera, a bit of morality tale, with the main hero who is both deeply unsympathetic and pitiable. There’s also some striking dreamlike imagery, my favourite being a night club sequence where César, in a drunken stupor, straps his prosthetic mask on the back of his head and prowls around like some perverse version of Janus, the two-faced god.

César’s disfigured make-up looks a bit unconvincing by today’s standards – you can clearly tell where the actor’s face ends and latex begins – but I give the filmmakers props for really going all the way with his facial injuries. While I was looking for the review hero image I stumbled on the screenshots of Tom Cruise in Vanilla Sky, and the artist’s brief for it must have been, let’s not disfigure our big bankable Hollywood star too much. Other than the dated make-up, the score at times got too melodramatic and overwrought for my liking, but overall this was a fantastic mind warp of a film.