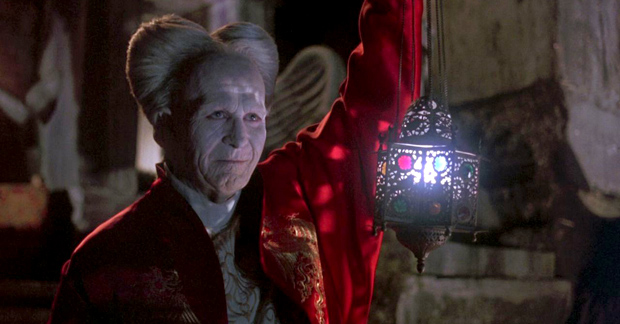 It’s been forever since I read Bram Stoker’s classic gothic horror novel, but I can’t really remember Dracula giving the female heroine her sexual awakening. Nevermind, I do have a soft spot for the Beauty and the Beast trope and Gary Oldman as the monstrous yet tragic Dracula is captivating and sensual… well at least when he’s in his young human Gary Oldman form with the fabulous long hair. Not so much when he’s hanging from a ceiling as a hideous human-sized bat.

In this version, Vlad the Impaler turns to vampirism after the tragic death of his wife, who hurls herself off a parapet at the false news of his death. The priests tell him that a suicide will never enter heaven, which enrages Vlad; he renounces God and embraces the immortal life of a blood-sucking monster. Fast forward 400 years to the end of the 19th century, and Dracula sees a spitting image of his wife staring at him from a photograph belonging to a young attorney (Keanu Reeves, a.k.a. What the Heck Am I Doing In A Period Piece) who visits Dracula in his picturesquely sinister castle.

Directed by Francis Ford Coppola, this adaptation is by no means perfect, but it’s a gloriously decadent feast for the eyes. I first watched this movie almost twenty years ago and its opulent imagery imprinted on my brain just from that one viewing. The imaginative production design, the sumptuous costumes, the unrestrained romanticism, the fantastic horror score are all a thing of beauty. There are billowing Victorian dresses, creepy shadows, long red cloaks, rooms full of candles, evil vampire succubi, bleeding crosses, and many many transitions between various circular shapes (like the eye of a peacock feather transforming into a railroad tunnel at the start of the film). The special effects and make-up still look good, other than a few decidedly cheesy shots of Dracula in his animal shapes. At the very least, even when the practical effects look dated and clunky you know that what you see onscreen is actually there.

The original novel was written as a series of documents, and the film largely preserves this episodic structure, switching between several protagonists and multiple narrators. This is somewhat to the detriment of the film, which feels like a succession of set pieces rather than a story with a real drive. The performances are a mixed bag; as mentioned before Gary Oldman is utterly magnetic and his line readings in the first half of the film as the bouffanted old Dracula (Listen to them, the children of the night. What music they make!) are just delicious. I couldn’t decide whether Winona Ryder is actually good as Mina, or whether it’s just that she has such a perfect look for the film with her huge dark eyes and her angelic beauty. Anthony Hopkins’ over-the-top turn as the vampire hunter Van Helsing is hit-and-miss, sometimes it works and other times his wacky ways fall flat. Tom Waits is heaps of fun as the deranged bug-eating Renfield.

Keanu Reeves… ooh dear. I confess, I can never really hate Keanu Reeves even when his performance is like a walking wooden plank, but god he’s terrible here. Jonathan Harker is a pretty dull character to start with, and Reeves almost made me wish for Mina to dump her boring husband and go for the depraved immortality. Despite these shortcomings, there’s still plenty to love about the movie, especially from the visual standpoint, and it’s a fantastic take on the classic monster.