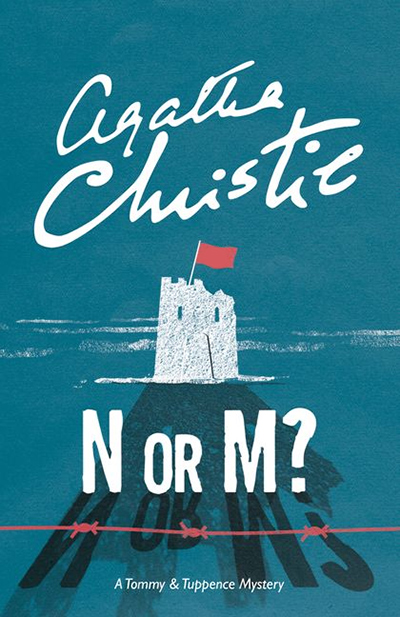 It seems that, without really intending to, I’m reviewing Christie’s Tommy & Tuppence series in a reverse chronological order, with our pair of intrepid married sleuths getting younger and younger. This novel, set in the early years of World War II, sees T&T in their late forties. While their grown-up children are actively involved in the war, Tommy and Tuppence feel useless and mighty frustrated about the fact that their government considers them too old and unfit for work. Things change however when Tommy gets a visit from a secret agent, asking him to go down to a sleepy seaside hotel in order to uncover a dangerous network of fifth columnists.

With the invasion of Britain a looming threat, British Intelligence have a serious concern about the German agents and British traitors infiltrating the high command and their own organisation, so Tommy, who is a private citizen without official connections, is a perfect choice. His mission is to identify two key enemy operatives known only as N and M, who, according to the last dying words of the murdered secret agent, have something to do with Sans Souci, a guesthouse in Leahampton. Tommy is meant to work alone and feed Tuppence a cover story about some boring desk job in the wilds of Scotland, but he gets a shock when, upon arriving at Sans Souci, he meets a fellow guest, a Mrs Blenkensop, who looks awfully familiar. Tuppence has no intention of getting left behind and she’s fed up with knitting balaclavas.

Working mostly independently, Tommy and Tuppence are initially discouraged, since the guests at Sans Souci seem so ordinary and harmless and the notion of any of them being a secret spy feels ridiculous. Their best bet seems to be a likeable young German refugee who fled the Nazi regime, and their hostess Mrs Perenna, who is clearly hiding some secrets in her past. Meanwhile, the readers are left to scratch their heads on whether these obvious red herrings are really red herrings, or whether there’s some double bluff going on.

I remembered N or M? as the Tommy & Tuppence novel I enjoyed the most by far, and I felt the same on the re-read; while no classic it is a lot of fun. Unlike some other Christie thrillers with their sinister cabals planning world domination, this book is better off for being grounded in the real events and the real threat of German invasion. It is fairly unusual in this regard, since Christie’s plots are rarely tied so explicitly to the period they’re set in. It captures the various moods of the time among the ordinary British citizens, and the presence of a German character naturally can’t help but create tension (it also provokes a rather wonderful and emotional monologue from Tuppence on how she feels about Germany in abstract as opposed to the ordinary Germans, which is probably my favourite passage in the novel).

Tommy and Tuppence’s mission is inherently dangerous, but there’s a lot of comedy mined from the scenario where a long-married couple must pretend to be strangers (their agreed roles are that of a widow pursuing a hapless middle-aged man in search of Hubby Number 3). Tuppence in particular relishes her elaborate backstory and her three fictional sons, though there are also times when her heart is heavy at the idea of having to feign concern for her fake children when her real son is out there risking his life on the front. While the first two thirds of the book are fairly domestic as the couple’s suspicions move from person to person, by the end it turns into a more tense thriller, with real life-threatening situations for our heroes.

On the downside, the characterisations of the other guests rarely rise above adequate – in fact the most memorable supporting character here is a little girl who can only talk in toddler babble. I’m also not a fan of the fact that Tommy’s big breakthrough happens not because of any clever deduction, but a near-comical accident in a bathroom. Still, unless the remaining two novels in the T&T series surprise me big time, N or M? is a clear standout.