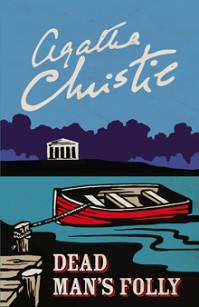 One of the best things about my Agatha Christie challenge has been learning all sorts of trivia about the books I’ve loved for many many years. I never realised that Dead Man’s Folly was actually written around a real, specific location, namely Greenway House in South Devon. Once the beloved holiday home of Agatha Christie, the estate is now apparently open to the visitors, and if I’m ever in that part of the UK I’ll be sure to look it up.

This is another Poirot mystery with a special guest appearance by the crime writer Mrs Ariadne Oliver, but unlike Mrs McGinty’s Dead, where Mrs Oliver pops up mainly to deliver some entertaining meta-commentary about writing, here she actually kickstart the whole story, summoning Poirot to the Nasse House in Devon. The owner of the place, Sir George Stubbs, is hosting a summer fete, and it’s decided that a Murder Hunt would be a fun addition to the day. Mrs Oliver is hired to devise the crime scene and everything goes swimmingly, but for some reason she can’t shake off a feeling that something terrible is about to happen.

Poirot, who’s always been pretty sceptical about Mr Oliver’s “woman’s intuition” when it comes to solving crimes, doesn’t discount the fact that, as a highly sensitive person, she might very well have picked up on something sinister. Upon coming to the picturesque Nasse House, he meets various personalities involved in organising the fete, including Sir George Stubbs and his much younger wife Hattie, who is judged to be “simple” or “subnormal” (this is a 50s book) by most people who know her. Poirot doesn’t detect anything suspicious outside of normal agitation and nervous tension that usually surrounds a public event, but on the day of the fete Mrs Oliver’s premonitions tragically turn out to be correct.

The local police are completely stumped by the seemingly senseless murder of an innocent fourteen-year-old girl who was meant to pose as the hunt’s pretend victim, and the baffling disappearance of Hattie Stubbs on the same day. Poirot at first is just as clueless, but of course you know that eventually his genius will peel off the layers and uncover the truth. Re-reading this book is fun because you can appreciate how the crucial pieces of information were revealed early on, masked as innocent throwaway remarks.

The book has a great sense of country atmosphere and, like many other Christie books, serves almost as a snapshot of time and place (including some less-than-savoury attitudes towards foreigners). Some supporting characters are stronger than others, but Mrs Oliver is as fun and endearing as always and provides a lot of the novel’s humour. Unusually for a Poirot book, Dead Man’s Folly doesn’t end with a drawing room assembly where Poirot confronts the murderer and explains the crime to everybody. Some might be disappointed by this lack of the traditional big finish, but I liked the more low-key denouement. Even more shockingly, the Character Who Knows The Truth But Won’t Speak Up doesn’t die in this one.