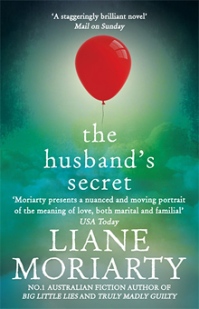 Another compulsively readable novel from the author of Big Little Lies. I forgot to take a book with me on our recent weekend getaway to Tasmania, so I had to pick something at the airport fast. As a light holiday read this was perfect (I got it as a buy-one-get-second-halfprice deal with Gillian Flynn’s Sharp Objects, but that one is bound to be less fluffy for sure).

Like Big Little Lies, this book also follows the interconnected stories of three women with a Catholic primary school in Sydney as the shared backdrop. Cecilia, a mother of three young girls with a booming Tupperware business and a perfectly organised life, is the character with the proverbial Pandora’s Box hidden away in her attic. Because of her daughter’s quirky interest in the Berlin Wall, she comes across a dusty envelope addressed to her in her husband’s handwriting, to be opened only in the event of his death. Can she stop herself from opening it prematurely, since her husband is still very much alive? Cecilia only rips into the envelope at around 160-page mark, but when it’s finally revealed the husband’s secret is a punch to the gut indeed.

Meanwhile, there are other two main characters going through rough times. Tess is a marketing exec from Melbourne who finds out that her husband and her cousin/best friend have fallen in love behind her back. Rachel is a widow haunted by the murder of her teenage daughter Janie, whose life revolves around her little grandson. But now her son and daughter-in-law plan to take him with them to New York for two years (or, in Rachel’s cynical estimation, for the rest of their lives), and Rachel can feel her world unravelling.

Despite the elements of mystery and thriller, it didn’t feel like there was much actual story in the novel when you break it down to basic plot points. But the ordinary life stuff and everyday conversations that take up most of the book never feel like filler because of Moriarty’s witty, sparkling writing and sharp observations. Her books that I’ve read so far don’t veer much outside of the comfortably middle-class families, but her insights into this particular strata of the society feel absolutely spot-on and made me chuckle out loud quite a few times (my only criticism is that the male characters are way more thinly written and wishy-washy than the ladies).

Though the tone is overall light, the novel takes its characters into some dark places where they find out their real limits, what’s truly important in their lives and how much they’re willing to forgive. The story also reminds us how closely our lives run to the abyss, with the accidents that could happen to anyone and unpredictable chains of events ending in disaster.