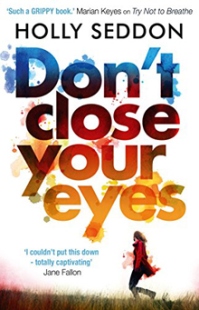 This psychological thriller left me with a question, can an average book be elevated by a brilliant, shocking last-minute twist that makes you look at the story and characters in a whole different light? Yes… to a degree.

The story centres on two sisters, Robin and Sarah, who despite being fraternal twins are pure chalk and cheese: Robin is wild, rebellious and outspoken, Sarah is a good girl, docile and eager to please. When a shy and sensitive boy called Callum Granger shows up at their school and becomes friends with the girls, none of them can predict the seismic shift that’s about to rock their families and leave Robin in the UK while Sarah moves to the States.

Now adults, the estranged sisters are both tragic screw-ups in their own ways. Once a successful rock star, Robin is now an agoraphobic recluse, spending days in her Manchester apartment obsessively exercising and watching her neighbours through dirty windows. Sarah meanwhile has been kicked out of her home where she was declared unfit to look after her child. Sarah however plots to get her beloved three-year-old back, and her plan involves finding her sister. The book constantly shifts between the two perspectives and the past and present timelines, with twists and turns and family secrets galore, until the final revelation pulls the rug from under the reader’s feet.

The problem with this final twist though is that it makes a lot of the book, and much of Robin’s storyline, feel like unnecessary filler. There’s a setup for a Hitchcockian intrigue in the style of Rear Window or Girl on the Train, with a subplot involving one of Robin’s neighbours, but in the end it’s only there to create a clumsy and heavy-handed parallel with an earlier traumatic event. Robin’s rock star past and current sad shut-in state are potentially interesting, but they’re not really connected to anything else in the book and the whole scenario feels like it’s mostly there to make Robin unreachable to Sarah so that plot can happen.

Don’t Close Your Eyes is compulsively readable despite the slow start, and once I finished it I went back and re-read some of the earlier chapters with the ending in mind; I quite admire the skill of playing with your readers’ assumptions without cheating. Without that explosive ending though the book would just pass through my brain not leaving much impression.