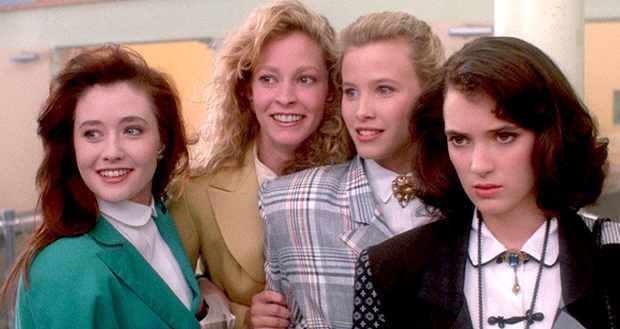 I didn’t know much about this movie other than its highschool classic status alongside films like Clueless and Mean Girls, but it turned out to be a different beast altogether. Darker, more subversive and definitely not pretty in pink. In a good way.

A pitch-black satire shot in bright primary colours, Heathers starts off in a fairly standard way, mapping out Westerberg High in Sherwood, Ohio, where our heroine Veronica (Winona Ryder) is the fourth most popular girl. There are the usual groups of jocks and nerds, a sad loner girl no one talks to, and then there are the Heathers, the bitchy top clique who rule the roost. Veronica, the newbie of the clique and the only one with a shred of empathy, is secretly appalled by their behaviour but keeps her opinions to herself. Being popular is a job, she explains, and sometimes you just don’t like your co-workers.

Enter the bad boy misfit J. D. (Christian Slater), who naturally wears black leather, rides a motorcycle and sounds like he’s impersonating Jack Nicholson. He charms Veronica and after she confesses her loathing for the alpha Heather, J.D. “accidentally” kills her by tricking Heather into drinking drain cleaner, then masks the death as a suicide with the help of Veronica’s handy forgery skills. To Veronica’s annoyance, the suicide note unexpectedly turns Heather into a sensitive misunderstood martyr, but the real problem is that J.D.’s guerilla war against the popular has only just began.

Until its ending, which, I wasn’t surprised to learn, was tweaked at the insistence of the nervous studio, Heathers is a delicious dark comedy with a nasty anarchic streak; teenage cruelty and adult hypocrisy and stupidity have rarely been skewered so scathingly. The romantic rebel turns out to be a psycho, the story doesn’t culminate with a happy prom, teenage suicide, bullying, highschool shooting and eating disorders are all fair game for comedy (of course, the seemingly flippant way of treating heavy topics is very much the point of the film). It feels like a movie that got made while no one was looking and it’s certainly hard to imagine it being green-lit today.

One thought on “Heathers – Film Review”