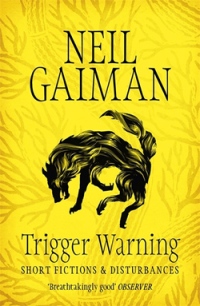 Neil Gaiman has become one of my favourite writers over the years and I was happy to get my hands on this latest third collection of short trips into the weird, shadowy country of Gaiman’s mind. It never really occurred to me to compare him to Ray Bradbury, but in fact Gaiman’s short stories have the same effect on me that I had while engrossed in Bradbury’s fiction when a teenager – a pleasantly uneasy sensation of looking at the world in a distorted mirror, or lifting the fabric of reality to find some dark, strange, disturbing things lurking underneath. Gaiman’s imagination is just as boundless, and his voice as a writer is just as distinctive (his books on the whole have a lot more graphic sex, though not in this particular collection).

The introduction to Trigger Warning attempts to bring the stories together by a loose idea that each of them has an element that could be potentially upsetting to someone somewhere. While this pitch is not particularly convincing, I didn’t mind the lack of cohesiveness, and actually enjoyed how random and diverse the stories were. It kinda reminded me of concocting my own mix tapes back in the dark ages of cassette tapes, with the idea of cramming in as much musical variety as possible, and just enjoying the jarring effect.

It’s clear that short stories is the way for Gaiman to have fun and experiment with form, with wildly imaginative results that touch on horror, fantasy, science fiction, satire, comedy, traditional myths and fairytales. There are poems (two of which I’ve actually read while guiltily skipping the rest); a Sherlock Holmes story about bees; a Doctor Who story you can perfectly enjoy without familiarity with the TV show; a fairytale mash-up of Sleeping Beauty and Snow White; a cycle of twelve very short stories with each one dedicated to a month of the year. My personal favourite was a piece titled The Man Who Forgot Ray Bradbury, which pays homage to the writer whose work had left an indelible impression on Gaiman as a boy. As a huge fan of Bradbury’s beautiful, bizarre writing, I found this story very moving. I was also glad to see the return of Shadow Moon from American Gods in a longer final story, in which his wanderings take him to Derbyshire’s Peak District where he has a sinister encounter with the local dark past.

A mixed bag like this is bound to be a tad hit-and-miss. In fact after the first two so-so entries I began to doubt whether I was going to enjoy this collection, but it picks up eventually. Its peaks don’t really match the best of Fragile Things and Smoke and Mirrors, the previous two Gaiman short story collections, but then I don’t know if any short story of his is going to be as memorable and disturbing as Snow, Glass, Apples, a truly creepy and warped retelling of the Brothers Grimm’s classic Snow White and The Seven Dwarfs (in which Snow White is a vampire… yeah Disney is not adapting it any time soon). Still, while I wouldn’t recommend Trigger Warning as an entry point for someone new to Gaiman, I found it a very enjoyable read.