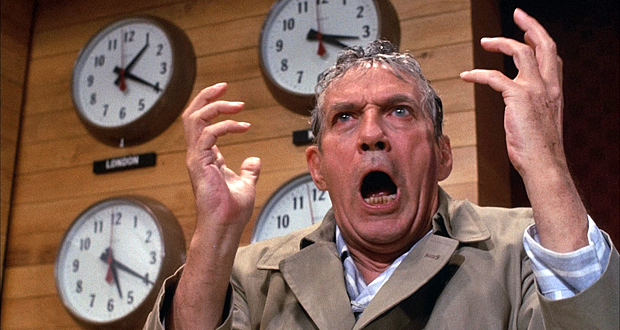 Workplace comedy, media satire, smart and articulate dialogue – it’s little wonder that I loved this 1976 black comedy-drama about the TV network cynically exploiting a deranged former news anchorman for the sake of ratings. The film might be 40 years old now, but it’s amazing how relevant it still feels, even though the grip and power of television has been rather diluted since then.

I knew virtually nothing about this movie beforehand other than, a) Faye Dunaway was in it and b) the famous “I’m mad as hell and I’m not going to take this anymore” rant. The latter comes from Howard Beale (Peter Finch), a veteran news presenter who learns that he’s about to be fired. The first sign of his crack-up comes when, during the live broadcast, he promises to kill himself on air. Understandably, he’s yanked off the TV, but he begs his boss and long-time friend Max Schumacher (William Holden) to give him one last chance at a more dignified farewell. Instead, he ends up having a total meltdown, culminating with his famous tirade. At first it seems a final nail in the coffin, but his ravings catch the attention of Diana Christiansen (Faye Dunaway), a shark of a programming executive who is looking for an “angry” show and thinks that Beale is a perfect modern-day mad prophet who could get their ratings going. That he’s really a mentally unstable man in urgent need of psychiatric help is a minor detail that can be brushed aside.

Diana is a fabulously devilish character: seductive, obsessed, power-hungry, amoral, and Dunaway rips into the role with gusto (and her cheekbones could cut diamonds). She ends up having an affair with Schumacher, whose job she also promptly takes over and who is strangely fascinated with her, even though he knows he’s in for the world of pain and trouble hooking up with a woman incapable of real human relationships. There’s a hilarious/sad scene where, during even their most intimate moments, Diana won’t stop talking about her job, ratings and contracts. There’s no idea too outrageous for Diana – one of her babies is a show called Mao Tse Tung Hour, a show based on the real exploits of a group of radicals, whom she woos with a contract. While funny, this subplot feels more like a story convenience that comes into play near the end.

Network doesn’t really say anything unexpected (big corporations only care about the profits!), but I’ve rarely seen it said in such an entertaining and articulate way. Thanks god this DVD had the subtitles, because I wouldn’t wish to miss on any of the movie’s razor-sharp dialogue.