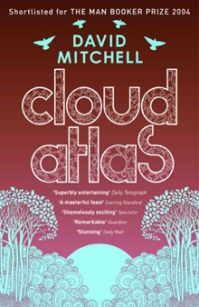 What a book. Its scope and ambition made me feel like I’ve read multiple books and been away on a very very long journey. At one point it even gets cheekily self-referential when one of its protagonists wonders out loud, “Revolutionary or gimmicky?” Neither, from my perspective, but it’s one hell of a remarkable book. It can frustrate and demand patience at times, but it’s immensely rewarding the more you stick with it.

Cloud Atlas is a collection of six stories, all set in a different place and time, and each told in its own unique voice and style. It took me a while to get into the first tale, a diary of Adam Ewing, a 19th-century American lawyer who is crossing the Pacific on his way back to California. It annoyed me straight away with its use of ampersands and the story didn’t seem particularly interesting… and then when it finally gains momentum, it abruptly stops and it’s on to the next story. Argh the frustration! I eventually got over the fact that every story would cut off just when I was getting into it, but it was a sore point for a while. The second story is a series of letters written by Robert Frobisher, a young, bisexual and cheerfully amoral 1930s British composer, who is disowned by his family and convinces a dying musical genius to take him on as a student/assistant. Frobisher sounds like a character who could have walked from the pages of an Evelyn Waugh novel, and is enormous fun to follow. The third story is something like a pulpy thriller set in 1970s California and featuring Luisa Rey, a journalist who uncovers a sinister corporate cover-up. To be honest I found it the least compelling of all stories; its cat-and-mouse, plucky-hero-against-the-evil-corporation plot is only mildly interesting and the characters were nothing special. The fourth story is the most comical one in tone and narrates the woes of Timothy Cavendish, a 1980s London publisher who finds himself in a serious pickle when the thuggish relatives of a successful (if dead) author come knocking on his door.

The fifth and sixth stories is where the book really crossed into the “can’t put it down” territory, for me. Unlike the previous stories which are grounded in the real world and its past, these two jump centuries ahead and into the realm of science fiction. The fifth story is told in an interview format and features the book’s most memorable, intelligent and haunting character, Sonmi-451, a clone who lives in what used to be Korea but since turned into a totalitarian, ultra-capitalist state where humans are referred to as “consumers” and the clones are basically slave labour (promised carefree life after some years of servitude, but you can guess straight away where that one goes). For reasons unknown, Sonmi gains intelligence and awareness that sets her apart from her sister clones, and takes her out into the world beyond the food chain eatery she slaves in. The theme of clones and artificial intelligence is nothing new, granted, but the world of the future state of Nea So Copros is wonderfully imagined and detailed, and Sonmi’s story is genuinely moving. The sixth story – the only one not split into halves – is simultaneously the best one in the book and the hardest work to get through. It jumps even further in time into a post-apocalyptic future, where the human race has been reduced to a few surviving communities here and there maintaining the faint, fragile embers of civilisation. It’s written in an imagined future tribal dialect that has a certain poetic quality and flow, but dear god the apostrophes. Here’s a sample sentence:

I din’t sleep none that night, ‘cos o’ the mozzies an’ nightbirds an’ toads ringin’ an’ a myst’rous some’un what was hushly clatt’rin’ thru our dwellin’ pickin’ up stuff here an’ puttin’ it down there an’ the name o’this myst’rous some’un was Change.

So yeah it took some getting used to, but as in the previous story, this future post-technological dystopia is inventive and richly imagined, and this tale spells out one of the most important themes in the book, the hunger for more more more that both fuels the progress of the human race and dooms it to extinction. I figured that the stories would somehow be all linked, and they of course turn out to be, whether it’s a common theme (incarceration or enslavement being one of them) or more concrete details. Some of these connections are better executed than others; there’s one particular re-occurring physical detail which I felt was rather unnecessary. Even though chronologically the conclusion is a massive downer, Mitchell still manages to finish the novel on a hopeful note that puts faith into humanity’s better, more generous instincts.