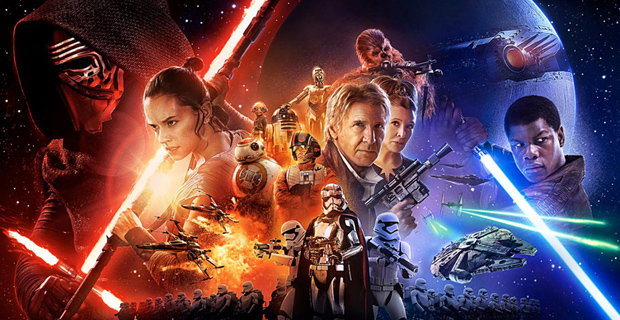 In a nutshell, despite some winning performances and energetic direction of J.J. Abrams, the movie falls short due to mediocre writing and some of the common problems plaguing many of the modern blockbusters. I was hoping that it would be a lot like Abrams’ first Star Trek film, which I adored to bits despite its story/villain shortcomings, but unfortunately it felt more like a companion movie to Star Trek: Into Darkness: never boring, but ultimately hollow.

I’ve read some criticism about The Force Awakens basically following the template of the very first Star Wars film, but I can honestly say that it’s not what mainly bothered me about it. It’s true that I really didn’t care for yet another Death Star storyline – here it’s been upgraded to an even bigger Starkiller that can destroy five planets simultaneously. How many times can the bad guys spend their time and resources on a massive superweapon that keeps getting blown to smithereens every friggin’ time? Also, some of the nostalgic winks made me cringe, like for instance Han Solo recycling one of his best-known lines from the original trilogy (which by the way only highlights the film’s serious lack of quotable dialogue of its own). But again, nostalgia wasn’t the real problem. Disney spent billions on the rights, the prequels left a sour taste in many people’s mouths, so whatever, play it safe and lay on the familiar for your first new movie. But while The Force Awakens copied the beats from the original films, it forgot to copy the stuff that made those stories work.

– The movie had a case of franchiseatis where it felt like the whole thing was a setup for the next movie. A New Hope was a self-contained film that gave enough information about the characters and their world, without the viewers having to trot out the “oh well maybe they’ll explain it in the sequel” excuse. It didn’t leave its characters hanging with unexplained backgrounds and backstories – the later films simply revealed that there was way more to them than what you’ve originally thought.

– The plot of A New Hope centred on the attempt to destroy the Death Star, but here the Starkiller stuff is just a distraction tacked on the main plot in order to pad the movie out, serve up some action scenes and make it seem like our heroes have accomplished something. The central storyline about locating the missing Luke Skywalker is frankly too thin and there’s no reason why it should have been stretched out for an entire film.

– I’ve no idea of what the bigger political picture is here, so I’ve no idea of what the stakes are for this universe. In the original trilogy, it was dead simple: the evil Empire was in charge and the Rebels were the underdogs. Here, we have the Republic, the First Order (basically Empire with more overt Nazi overtones), and The Resistance… so is the Republic in charge with the First Order acting as a sort of a terrorist cell? Or is there a civil war going on? If the Republic is in charge, why the name “Resistance” which implies a struggle against the prevailing order? The prequels were bogged down with tedious politics but this movie does the opposite and explains far too little.

– The breakneck pace of the movie leaves no room for characters to breathe, which leads to way too many instances when the emotional moments are either glossed over too quickly, or feel unearned. As lovely as much of the camaraderie between the characters is, the film sometimes is too eager to have the characters banter like old friends and form deep ties when realistically they spent barely any time together. There’s a Big Scene in the third act that tries to be all tragic and Shakespearean, but because the movie spent zero time on the relationship between the characters, the reason it succeeds even partially is through the sheer effort of the actors. And because the movie then jumps back to the frenetic action with minimal time given to the characters’ reactions, the whole thing feels like it has no real weight.

– Oscar Isaac is a fabulously charismatic actor, but unfortunately his character disappears for the large chunk of the movie and feels underwritten. I wasn’t surprised to learn that there was a late decision to include more of him, because the lack of planning with Poe Dameron really shows.

– Supreme Leader Snoke, the new big bad, is one dud in Andy Serkis’ illustrious motion-capture career. As far as I can tell the character design brief must have been, Gollum and Voldemort mashed together and enlarged for no good reason whatsoever. Domhnall Gleeson, who plays the evil General Hux, does ok but during his speech to the troops I kept thinking, why is this little twerp in command? Don’t they have older, more imposing officers around? Oh and why create a cool, distinct Stormtrooper character with Brienne of Tarth on the inside and give her stuff all to do?

– The scenes between Han and Leia would have been really moving if it wasn’t for the fact that Carrie Fisher’s facial muscles got frozen by the Botox.

– John Williams’ score is woefully unmemorable and only comes to life when it references the old, instantly hummable themes. No Duel of the Fates standouts here.

– Daisy Ridley got tons of acclaim for her turn here, but to me she was hit and miss. She’s natural and charming in some scenes and in others her line delivery was a tad wobbly and reminded me of Keira Knightley’s more wooden moments. Rey also was too much of a magical perfect heroine who picks up all the skills the plot needs her to have all too easily. Because she’s a sole main female character she gets the kind of scrutiny a male character would never get – she’s a strong independent female character and everybody who complains has a problem with competent women! she’s blatant pandering to PC and feminism! – but really the problems with her character are just a part of the overall rushed execution and convenient writing.

I guess it’s only fair to say that there was also quite a bit to like in the movie as well. BB-8, the new droid on the block, is amazingly expressive and just the cutest thing ever. John Boyega, who plays a renegade stormtrooper who leaves the First Order after the appalling massacre at the start of the film pricks his conscience, is enormously likable and felt like the most relatable character in the movie (even if his defection story is too rushed just like everything else). Harrison Ford seems to genuinely enjoy his return as Han Solo – this was no “show up and get the paycheck” performance. There are many scenes in the film where the chemistry and interplay between the actors is absolutely smashing – something that J.J. Abrams always excelled at. And though his character is underwritten, I really liked Kylo Ren, the new villain who’s Darth Vader’s biggest fanboy, to the point of wearing a pointless mask so that he can have a cool evil distorted voice just like his idol. I liked him mostly thanks to Adam Driver, who’s got one of the strangest faces I’ve seen onscreen (I mean this as a compliment), a wonderful deep voice and a striking, gangly yet elegant physical presence. Ren’s scenes with Rey have a weird compelling energy to them, not attraction exactly but certainly some kind of connection, that makes me interested in where these two characters might go in the next movies. Although with Ren, I can already smell a redemption story coming along, and I’m a hopeless sucker for those but I just wish it didn’t feel so damn predictable and telegraphed in advance. I just hope it doesn’t end with him throwing Snoke down the shaft.

In the end, Force Awakens is not sterile and soulless like the prequels, it does feel like everyone involved really did give a shit, it’s fun while it lasts, it’s got the realism and grime that is most welcome after Lucas’ CGI fests. But gah is it too much these days to want some decent writing in a summer blockbuster? Or at least a simple, well-executed story that doesn’t depend on the future films to fill in the gaps?

It’s been ages since I’ve seen a big movie in a huge cinema full of people. To make a music comparison, I like my small intimate gigs but there’s just something special and thrilling about watching a big fat spectacle in an arena or a stadium setting. I had a couple of middle-aged guys with their kids on either side of me, and when John Williams’ iconic score kicked the movie off, I heard “goosebumps” and “I love this already”. I’m pretty sure one of them sniffled at one point, too.

Holy crap the trailer for Batman vs Superman was terrible. I like Jesse Eisenberg a lot but he was painful to watch. Add some forced quips, a mute Wonder Woman and a monster who looks like Weta’s rejected concept for the Cave Troll, and you have one big stinker.