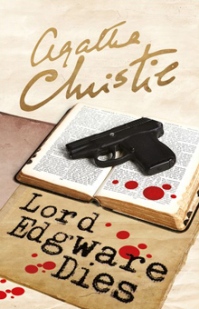 “Good title that, by the way. Lord Edgware Dies. Look well on a bookstall.” This Poirot novel may not be one of my absolute favourites, but you can tell that Christie had a lot of fun with it, including some self-referential winking. Though I’m not sure if Lord Edgware Dies is necessarily superior to the book’s alternative title, Thirteen at Dinner.

The unlucky Lord Edgware is a rather unpleasant individual married to a young glamorous American actress, Jane Wilkinson, who approaches Poirot with a request to help her get rid of her estranged husband. She of course doesn’t expect Poirot to bump him off, rather she wants him to intervene so that her curmudgeonly husband grants a divorce and Jane can remarry. When Poirot confronts Lord Edgware, however, he is totally onboard with the divorce, and claims that he had already sent his wife a letter agreeing to part ways six months ago.

The next morning, Poirot gets a visit from Inspector Japp, who informs him that Lord Edgware was stabbed in the neck by his wife at his house the previous night. Except that at the time of the murder, Lady Edgware was dining in a company of twelve other people, so not only does the prime suspect lack any real motive, she clearly couldn’t have been in two places at once. But no worries, because there’s still a decent pool of other players to pick from, including the late Lord Edgware’s daughter and nephew, and a talented actress known for her incredible impersonation skills.

This is another Poirot novel narrated by Hastings, so we get the usual entertaining mix of awe and exasperation he feels towards his brilliant and conceited friend (the funniest moments being when Hastings is positively dreading yet another remark about the power of the little grey cells). On Poirot’s side, there’s a nice moment, both affectionate and patronising, when Poirot explains that Hastings’ value to him as a detective is that his personality is closest to the ideal of a sane, normal person that a criminal seeks to deceive.

Even for a Christie novel, Lord Edgware Dies is packed to the brim with red herrings and twists as the attention shifts from one suspect to another, and Poirot probably sets a record for the amount of times he berates himself as an imbecile. This case stumps him worse than most and in the end he only solves it because of a chance remark from a passer-by. On the re-read, it struck me as unsatisfying that, in Poirot’s final explanation, an all-important fact that’s crucial to the murderer’s motive is just casually mentioned, begging a question why nobody considered it before and when exactly it became obvious to Poirot. Overall though, the novel has enough good stuff to be memorable, including the last chapter which is one of my favourite last chapters in all Christie mysteries, as well as one of my favourite last lines.