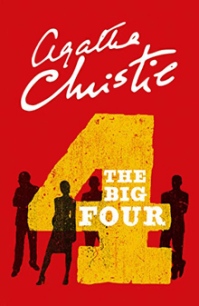 Picking this Poirot novel as my next Christie re-read was a purely strategic choice. Since I’ve committed to a full Christie marathon, it meant revisiting occasional stinkers as well as masterpieces; not everything Dame Agatha touched turned to gold. If I didn’t want to end up with a bunch of duds to read through gritted teeth, I’d better start sprinkling them in along the way. I remember being underwhelmed with a few Christie novels, but I’d be surprised if I come across a worse book than The Big Four. It’s a relief to get this travesty out of the way.

The novel is so bizarrely terrible I wasn’t in the least surprised to find out that, later in her life, Christie herself pretty much admitted to it being written just for the sake of money coming in. Nor was I surprised to learn that this disjointed mess was a mash-up of several short stories about Poirot previously published separately in a magazine. More than anything else, it reads like an embarrassing Poirot fanfiction concocted one evening after three bottles of Merlot and a James Bond movie on TV. Hey wouldn’t it be cool if Poirot was fighting an international cabal of supervillains who want to take over the world?? He could wear disguises, drop gas bombs, fake his death, and poor dumb Hastings could get kidnapped every fifty pages or so. Oh and how about we rip off the whole Sherlock Holmes vs Moriarty thing while we’re at it.

So yep that’s the book, with Poirot and Hastings bouncing between a few separate cases while trying to bring down a sinister organisation called the Big Four. Our quartet of supervillains are a Chinese mastermind, a French female scientist who makes Marie Curie look like an amateur, an American billionaire, and a master of disguise who’s basically the executioner disposing of unwanted and inconvenient people. It’s not clear how the group got together or what they want, outside of destroying the existing social order and coming out on top in the resulting anarchy, possibly with the help of a death ray developed by the French lady genius (no really). Nearly every case Poirot and Hastings come across ends with the mysterious No.4 leaving corpses behind and slipping through their fingers, taking on the proportions of Sherlock Holmes’ famous nemesis. Ever so often, Hastings or Poirot and Hastings both get kidnapped by the bad guys and taken to some evil lair which they of course escape.

I suppose one could maybe enjoy this book as a hilarious batshit insane Poirot story from an alternate universe where Poirot regularly carries curare poison on him to fight off the villains, but to me it’s just all too silly for words. It’s a bad sign when the plot is more cringe-worthy than the casual racism scattered across the book, which can at least be accepted as the unfortunate part of the period. Poirot barely feels like himself and even his usually endearing dynamic with Hastings is no fun here.

P.S. I sincerely hope that nobody picks this book as their first Agatha Christie novel and gets a wrong impression about the Queen of Crime.