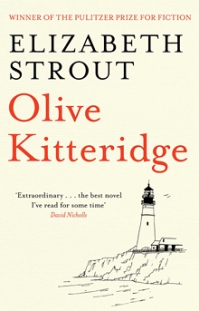 Books are like cities. Some you only ever need to visit once and you absorb all they have to offer in one go, while others you could re-visit over and over, getting lost in its alleys and passageways and noticing new things every time. This book, not quite a traditional novel but more like a novel in short stories, about the community in a small coastal town in Maine, is so rich in detail and insight I can see myself picking it up from the book shelf a few times over.

Olive Kitteridge, the retired schoolteacher, wife and mother, is the central figure of the book, yet it’s not a conventional narrative about one woman’s life. Some of the thirteen short stories comprising the book have Olive as the focal point, in others she’s a secondary character or a mere walker-by while the story concentrates on someone else – the town’s eccentric lounge pianist, a former student of Olive’s contemplating suicide, an old couple who confront the ghost of infidelity. Though the characters are disparate and mostly unrelated, their lives have been affected by Olive to some degree, and these outsider perspectives, however fleeting, help piece together the portrait of this complicated woman.

Make no mistake, Olive is not a Teacher Who Inspired Me, illuminating other people’s lives with her wisdom and goodness. She is exceptionally prickly and judgemental, rarely has a kind word to say about anyone, and her bad temper doesn’t spare even her amiable husband Henry and son Christopher. There are glimpses of the past scattered throughout the book suggesting that she was a scary mother as well as a scary teacher. Olive is also forthright, perceptive, tough, has a realistic perspective on life’s suffering, and is not without empathy. As the novel goes on, you get to understand and even sympathise with this complex character, as she slowly, painfully, gets a deeper understanding of herself and her life. I’ve always gravitated to unlikeable-but-compelling fictional characters, and considering that “likeability” is seen more of a must when it comes to female characters especially, I appreciated Olive’s character even more.

The other townspeople in the novel, with their own heartbreak and disappointments, are just as vividly drawn and imperfect. Strout’s style reminded me of Alice Munro, whose short stories also feel like they have the density of a novel; she also has a way of touching on a theme or emotion in an oblique way which means that you can’t just skim through the paragraphs. It says a lot about Strout’s taut, brilliant writing that I kept on reading the book even as I felt like it was dragging me down emotionally. There’s a lot of sadness and melancholy in Olive Kitteridge; death, illness, broken relationships, a sense of wasted and unfulfilled life, unexpressed and unrequited love, and so on. However hope springs up like a sapling, and the novel finishes with a sentiment that, no matter what the world may throw at us, it’s very much worth living in.