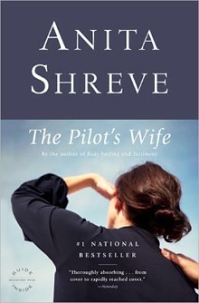 I’ve always been fond of the “how well can you really know even your closest loved ones” theme, and I quite enjoyed this quick and easy read, which doesn’t waste any time instantly pulling you into the story with the opening paragraph. I wasn’t all that impressed with another Anita Shreve book I’ve read a while ago, but she sure knows how to write a gripping beginning.

It begins with a late-night knock on the door that awakens Kathryn, the titular wife married to Jack, a pilot whose plane went down off the coast of Ireland after an explosion, with no survivors. From the moment Kathryn receives this terrible news, her life turns into a rollercoaster of grief, media whirlwind, and slow unravelling of who she had thought her husband was.

We get flashes of Kathryn’s old life with Jack: once passionately in love, they settled down into a good-enough, affectionate if somewhat distant marriage, living in a charming old house in a small seaside New England town with their teenage daughter. There was certainly nothing to suggest that Jack had suicidal intent, which becomes the leading theory of the investigation. But there are small details of Jack’s life Kathryn can’t figure out, like the cryptic initials she finds scribbled on a piece of paper stuffed inside her husband’s jeans.

Since the book is essentially about one woman’s grieving, it easily could have become tedious and one-note, but Shreve deftly serves up new revelations to keep the reader on their toes as the mysteries of the exploding plane and Jack’s past acquire new twists and layers. Kathryn is a sympathetic character, and her emotional struggles as she tries to keep it together digging into her husband’s past are well-written.

However I wasn’t sure how I felt about the resolution. While the first two thirds of the book had a rather timeless feel, dealing primarily with the universal emotions and themes, there’s an abrupt shift later on which very much binds the story to a particular time and place in recent history. There’s nothing essentially wrong with that, but this sudden change of gears into the political felt strange, and I thought it was a copout avoiding explaining Jack’s motivations by basically saying, well Kathryn is just never going to know and that’s human condition for you. Also, there’s a character hovering around in Kathryn’s life after the crash who could have just been named Incoming Love Interest, and that particular strand was too much of a soap opera for my liking.

Overall though it was a solid book and I’m glad I gave Anita Shreve’s writing another chance. It was a weird and sad coincidence that she passed away while I was reading her best-known novel.