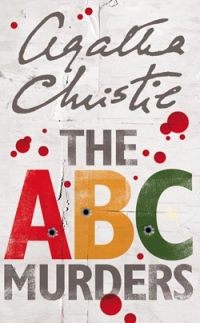 I was a true Agatha Christie obsessive in my teens, and I’m pretty sure I’ve read every single novel and short story she’s ever written, in Russian translation. Even now that I can see the flaws in her writing more clearly, her knack for plotting and the ability to construct an elegant puzzle of a mystery – and doing it fifty times over – is pretty phenomenal.

When I’m in between books and don’t feel like digging into something brand new, I’ll often reach for an Agatha Christie detective novel for a quick and easy detour. It’s hard to pin down exactly what, among all the other crime fiction I’ve read, makes them so uniquely re-readable despite knowing the identity of the murderer. It’s part nostalgia, part the very simplicity of Christie’s writing, uncluttered and efficient and not without its own charm and wry humour. Hers is a cosy, old-fashioned world that is just nice to visit from time to time.

The ABC Murders was an exception in that I’ve only ever read it once more than twenty years ago, and subsequently forgot all about the story, thus giving me a rare chance to read a Christie novel as if for the first time. It’s one of the later Hercule Poirot mysteries, in which Poirot is retired and Captain Hastings, his old loyal friend, is losing his hair, which leads to some amusing exchanges between the two friends.

The plot kicks off with an anonymous letter addressed to Poirot, which states that a murder will take place on a certain day in the town of Andover, and challenges Poirot to do something about it. At first no one around Poirot is convinced that the letter is something more than a sick joke, until, surprise, a murder does happen, with a couple of macabre details: the victim’s name also begins with letter A, and the ABC Railway Guide is left by the body as a calling card. When a second taunting letter arrives, it looks like a crazed serial killer is working his way through the alphabet. It also appears that the novel is handing the reader the murderer on a silver platter, with the narration switching from the usual Hastings first-person perspective to a third person view in the chapters about a certain Mr Alexander Bonaparte Cust, who might as well have been named Mr Red Herring.

Unfortunately for me, I figured out the culprit long before the end, because of a Jo Nesbo crime thriller involving a serial killer I read a while ago which had exactly the same (undeniably clever) twist. Even disregarding that, I didn’t think that The ABC Murders was a top-shelf Christie, and it’s not surprising that it hadn’t left much of a trace in my memory. Granted, it’s unusual in her oeuvre in that it deals with a serial killer, but, without spoiling things too much, I didn’t think that it delivered on that novelty, while also missing the strengths of her usual “small circle of suspects” setup. The supporting cast of characters isn’t one of Christie’s most memorable, and the experiment with the point of view feels largely pointless. A detective novel needs misdirection and red herrings like bread needs flour, but a red herring that lasts an entire novel while also being so bleeding obvious is just annoying. But I also wouldn’t call the book a failure, as it’s still fairly engaging and fast-paced, and the dynamic between Poirot and Hastings is endearing as always. Fact: I still can’t bear to re-read Curtain: Poirot’s Last Case, where the duo is parted forever.