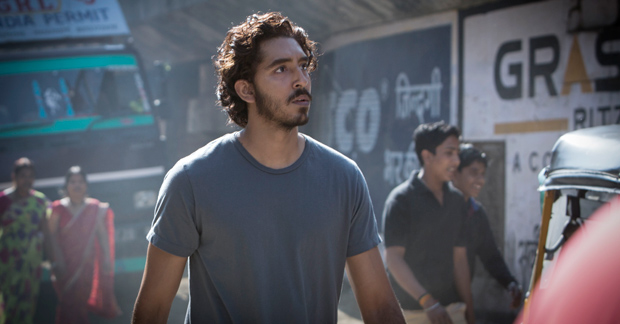 Based on a true story of an Indian boy who gets separated from his family, adopted by an Australian couple, then finds his birthplace 25 years later using Google Earth, Lion is an unashamedly emotional tear-jerker which mostly works. It’s heartfelt, beautifully shot and features uniformly strong performances (and on a totally shallow note, my my Dev Patel is all grown up and crushworthy).

While I knew the general storyline, I didn’t expect the film to be effectively split into two distinct halves. In the first, we meet Saroo (Sunny Pawar in a remarkable, eloquent turn), a five-year-old boy from a poor rural area who insists on accompanying his older brother Guddu on a trip to find work. When Saroo is too tired and sleepy to go on, Guddu leaves him on a bench at the train station. The boy wakes up alone, tries to look for his brother, and gets trapped for two days on an empty train which takes him 1,600km from home, to Kolkata. When Saroo finally gets off the train, he’s completely alone in a city where strangers talk in Bengali while he only knows Hindi.

This first half, which chronicles Saroo’s odyssey of survival in Kolkata, is easily the most compelling part of the film. Told with minimal dialogue, it captures the heartbreaking loneliness of a small vulnerable child in a huge indifferent city. Eventually, the fate smiles on Saroo and he is adopted by an Australian couple (Nicole Kidman and David Wenham), who live in Tasmania. Flash forward twenty years, and grown-up Saroo (Dev Patel) is a young man heading to a hotel management course in Melbourne, where, at a house party, the memories of his Indian family are prodded, leading him to an obsession with finding them.

Because the filmmakers decide to concentrate both on Saroo’s harrowing journeys in Kolkata and his grown-up anguish, the second half of the story, which really needed a 2-hour film of its own, comes seriously shortchanged. Saroo’s relationships with his adoptive family – which includes another Indian boy his parents adopt a year later, with less successful results – don’t feel fleshed out enough. Mantosh, Saroo’s adopted sibling, is a troubled boy who grows up into a troubled adult and there could have easily been an entire movie about the tense, complicated family dynamic, but as things stand it feels like the character could have been cut out of the film altogether with no big loss. Saroo’s memories are triggered in what feels like a very simplistic, “movie” manner – this kind of stuff works in melodramas but feels a tad contrived in a film that strives to be more naturalistic. Also, I found it hard to believe that until that particular moment Saroo’s biological family was never on his mind. Rooney Mara, though never less than compelling to watch, is rather wasted in the supportive-girlfriend part, and while Nicole Kidman’s acting is impeccable Saroo’s relationship with his adoptive mother doesn’t hit as hard as it could have.

Despite these issues and a general sense of lull about three-quarters in, the flagging pace eventually gives way to a genuinely emotional resolution which made the audience around me sniff and wipe their eyes (I got a tickle in my nose as well). And having been to Tasmania a few times, it’s nice to see its gorgeous scenery displayed so lavishly on the big screen.