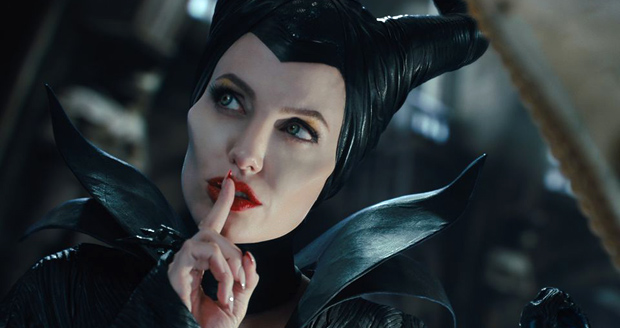 I think it’s pretty telling that the only time this Disney reinvention of the old fairy tale truly soars is when it recreates the classic cursing scene, in which Angelina Jolie’s Maleficent comes uninvited to the christening of baby princess Aurora to bestow a terrible curse. Dressed in black, eyes ablaze, with her naturally exaggerated features made even more striking courtesy of make-up master Rick Baker, Jolie looks utterly fabulous and alive and she visibly revels in the mayhem and revenge Maleficent unleashes. If only the rest of this limp if beautiful movie felt as spirited.

In Disney’s animated Sleeping Beauty, Maleficent curses Aurora just because she’s evil and spiteful, but here they attempt to give her a more sympathetic background, with the first 30 minutes acting almost as a kind of prequel. As the movie begins, Maleficent is a powerful but innocent young winged fairy who lives in the Moors, a magical realm bordering the human kingdom. She meets and falls in love with a young human boy called Stefan, but the two grow apart as they get older. Eventually the human king attempts to conquer the Moors, but Maleficent drives him back with the help of the forest army, in a sequence that feels like a poor man’s The Lord of the Rings, with one of the forest creatures even resembling a mash-up of Treebeard and Balrog. The king is mortally wounded, and promises to leave the throne to any man who can kill Maleficent. Seduced by greed and ambition, Stefan tricks his old girlfriend into drinking a sleeping draught, but can’t bring himself to kill her and instead cuts off Maleficent’s wings to present them as a proof of her death.

The movie is full of plot holes, characters making inexplicably idiotic decisions, and glaring inconsistencies – Maleficent’s powers for instance change from scene to scene depending on what the plot demands – but they’re not the movie’s biggest problems, the issue is rather Maleficent herself. A fresh new angle on a classic story can work wonders, as well as an attempt to humanize a character previously portrayed in black-and-white terms. You could have a decent story about how Maleficent didn’t just start out all bad, but instead grew bitter and twisted because of bad life experiences.

The problem with Maleficent is that, once the film gets her to the bitter point, it then loses nerve completely and won’t let her actually be bad and vengeful. It even wimps out during the cursing scene, where, instead of dooming Aurora to die, she proclaims that the princess will fall into an eternal sleep, and then bloody well provides the loophole for her own curse, i.e. that Aurora can only be woken by a true love’s kiss. Then, to make Maleficent look good, the movie turns the traditional three fairy godmothers into annoying dimwits who have no clue how to look after a baby they’ve been entrusted with and try to feed her raw carrots, so that Maleficent can reluctantly step in and send the baby she’s cursed barely ten minutes ago some milk. Puh-leeze.

This, I think, basically stems down to the common idea that a female protagonist we’re supposed to root for, even a supposedly “complicated” anti-hero, can never do anything really bad, and by god she’d better have a warm nurturing side hidden somewhere. Instead of injecting Maleficent’s story with some nuance and ambiguity, the movie simply does the switch where Maleficent is recast as good and Stefan gets to be a one-dimensional villain. It also tries to do a Frozen and subvert the traditional reliance on romance and a handsome prince, but the results are pretty leaden, partly because the relationship between Maleficent and teenage Aurora (Elle Fanning) never feels fleshed out. Aurora is bland as hell and her only setting in the movie is sweet and innocent and fairies OMG fairies I love fairies yay fairies!!! Is it just me by the way or has the whole “no romance, how progressive” chorus sorta become a cliché in itself, while reacting to a cliché? I’ve been reading reviews for Moana, which I do look forward to, and I swear my eye started twitching.