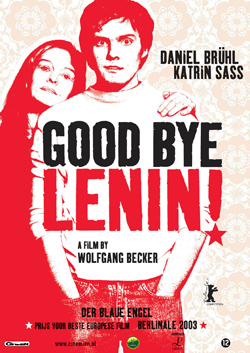 Charming, moving and funny German film set in East Berlin around the time of Germany’s re-unification in 1989. Even if it wasn’t any good, you’d still have to admire the original premise.

Alex (Daniel Brühl, totally adorable here) is an average young guy from the socialist part of Berlin, living in an apartment with his sister and mother, Christiane (Kathrin Sass). His father, we’re told, abandoned the family to live in West Germany with some capitalist home wrecker, and since then Alex’ mother has become a hardcore activist who lives for the socialist cause. But the winds of change are blowing, and one night Christiane collapses into a coma when she sees her son march in an anti-communist rally. In the months she spends unconscious, the Berlin Wall comes down, the old money becomes obsolete, and the capitalism moves in. When Christiane wakes up, Alex is told that another big shock could potentially be lethal, so he decides to conceal the truth about the reunited Germany from his mother and re-create East Berlin in her old bedroom where she recuperates.

Maintaining this illusion is no easy task and leads to the some of the film’s most hilarious moments. Alex spends time frantically looking for his mother’s favourite pickles, which are no longer on the shelves, or at least trying to fake them with the new Western produce repackaged in old jars he finds at a dumpster. When Christiane can’t help but notice some Western advertising out of her window, he enlists the help of his workmate with film director pretensions to create some fake news footage he then plays to his mother through a hidden VCR. Alex’s deceptions grow bigger and more elaborate, but the movie does an admirable job making them seem plausible within the film’s universe.

Despite the wacky premise and humour, Good Bye Lenin! is more of a tragicomedy than a straight comedy, and has a sad, poignant side to it. It’s not exactly nostalgic about the old German Democratic Republic, but it also shows that the change is not all roses and “capitalism, hell yeah”. In a way, in order to explain to his mother the new Western elements like a Coca-Cola ad and new cars, Alex unwittingly ends up not re-creating the old East Berlin, but inventing the GDR he might actually have wanted to live in and be proud of. It’s also a wonderful movie about the bonds of family.