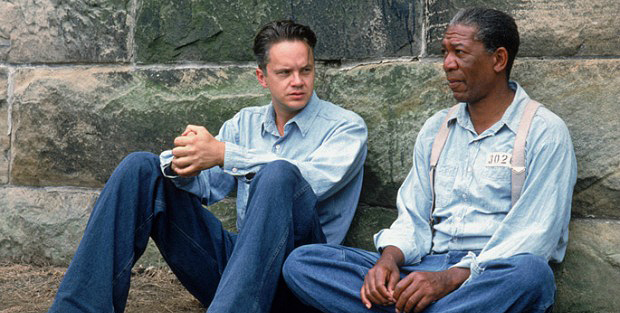 I finally watched this 90s classic, partly to put an end to the horrified what you haven’t seen The Shawshank Redemption??? reactions I invariably got from friends and acquaintances. Yes, it absolutely deserves its reputation as a great movie.

I’ve previously read the short story by Stephen King it’s based on, so I already knew the narrative payoff at the end (you could probably guess it anyway from the cheeky The Count of Monte Cristo reference thrown in), but the twist is not really the point. For the story to endure, it needs to be about something deeper and richer than dropping a surprise on the audience, and here it’s the themes of friendship, resilience and hope that resonate the most.

While the hero of the story is ostensibly Andy Dufresne (Tim Robbins), a former banker given two life sentences for the murder of his wife and her lover, Andy remains something of an enigma, a quietly spoken, self-contained man with an outsider aura who both fascinates and somewhat unnerves. You can understand why the jury who ends up finding him guilty at the start of the movie think that he’s a cold creep. Later on he earns the sympathy and admiration of both the viewer and his fellow inmates, including the lifer Ellis ‘Red’ Redding (Morgan Freeman), who becomes Andy’s friend, provides the narration for the movie, and ultimately gets the titular “redemption”. I found it interesting though that, unlike the book, the movie doesn’t disclose the details of Red’s crime other than just referring to it as murder – I suppose they decided not to test the audience’s sympathy too much.

The movie’s pace is slow, reflective and deliberate, fittingly so as it covers 19 years of life in an environment marked by tedium, with moments of shocking brutality and horror, but at the same time the film is never less than engaging and warm-hearted in the best sort of old-fashioned way. Even the few moments where the movie tugs on the heartstrings real hard, swelling musical score and all, feel earned. Oh and it was rather amusing to see Billy from Ally McBeal pop up as a young cocky criminal who briefly gives Andy the hope of acquittal; unexpected appearances like this is part of the fun with the older movies, I find.