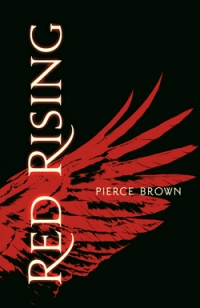 I liked the book, so it’s a tad weird to put “disappointed” in the same sentence, but have you ever read a book where you absolutely loved the first third – the setup, the world building, the characters – and then it turned into something else that, while reasonably entertaining, didn’t quite captivate you as much? Red Rising was that book for me.

The sci-fi dystopia has been around for decades, and the stories of a brave teenage protagonist out to challenge a totalitarian regime have enjoyed huge success recently with the likes of The Hunger Games, so there’s nothing particularly new about the book’s premise… but damn if it didn’t suck me in from the very first page. Our hero is Darrow, a sixteen-year-old miner who lives and works in the bowels of Mars, along with the rest of his caste called Reds. As befits any future totalitarian society worth its salt, all the humans have been divided into groups with their own particular tasks, in this case, colour-coded ones: Reds, Pinks, Blues, Greens etc., which also refer to the actual hair and eye colour of the individuals. Running the whole show is an aristocratic caste called Golds, who are basically superhumans and for whatever reason go under ancient Roman names – Octavia, Nero, Cassius etc. The Red miners’ lives are bleak and hard; a person over thirty is considered old and the Golds maintain ruthless control by encouraging drunkenness and competition between the mining groups, and punishing those who step out of line with flogging and hanging. But all in all, Darrow believes that the Reds are performing important task of making Mars habitable for the rest of the human race, who are still stuck on the dying, overcrowded Earth.

The blurb on the back of the book reveals it anyway, so it’s not too much of a spoiler to say that, one day, Darrow discovers that everything he’s been told is a lie. Mars has been inhabited for generations, and he and his people have been nothing more than slaves maintaining the hundreds of beautiful cities on its surface, where the rest of the colours live. This knowledge and a painful personal loss move Darrow to accept an offer from a mysterious rebel group, who disguise him as one of the elite Golds so that he can infiltrate their society and help bring it down from the inside.

So far so great; the story is told with urgency and punch, and while some of the developments were rather predictable it didn’t diminish the drama and emotion. You really get a sense of what a nasty, brutal place Darrow’s world is. I also really enjoyed the descriptions of the surface cities and the future technology, although you have to accept the contrivance that Darrow somehow knows all the proper names for the things he’d never have seen in his life. The story also works in the Greek and Roman mythology, which I appreciated having been a Greek mythology obsessive in my teenage years.

Then, at around 33% mark, the book turns into… well maybe it’s unfair to call it The Hunger Games on Mars, as the setup is not exactly the same, but it’s pretty damn close. When I realised that this was going to be the setting for the rest of the book, I felt a tad deflated; it was like the author teased me with a vision of this intriguing strange world, with multiple inhabited planets no less, and then locked the characters in some drab, generic setting that simply can’t offer that much variety. That’s not to say the book gets bad or anything; there’s still plenty of tension, some good character interactions and twists that I genuinely didn’t see coming. Darrow, who by the virtue of being The One does get to be smarter and better than anyone else, still stuffs up sometimes and needs to learn things about himself, the other Golds and what it takes to be a leader. But considering how excited I was after the first third, the rest of the book didn’t quite live up. Also, while most of the writing is good, again particularly at the start, the aristocratic language of the Golds sometimes came off very contrived, kinda like a bad parody of English upper classes by somebody who watched a couple of Downton Abbey episodes.

Still, the ending opened up some very juicy potential for the sequel, which I do plan to read. Here’s hoping that the author doesn’t get stingy on the scope next time around.

One thought on “Red Rising by Pierce Brown – Book Review”