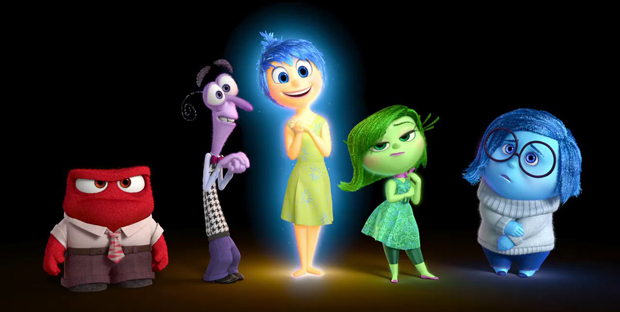 Welcome back Pixar, I missed you guys.

I suppose technically that’s not correct, since I did love Toy Story 3 a lot. But if I had to think of an original Pixar movie I loved without reservations, I’d have to think back as far as The Incredibles* in… 2004? (I say that a lot lately but man does time run fast). Since then, even the universally acclaimed Pixar movies had been hit and miss for me. Ratatouille was just ok with one great scene near the end. Wall-E was half of a brilliant film until it got to the fatties in space. Up was a quarter of a great movie – I honestly cannot remember anything that happens after the old man and the boy land in South America. So while Inside Out gathered all those great reviews, I still went into the movie rather cautiously.

I needn’t have worried because the movie was fantastic through and through, and had everything that made the classics like the Toy Story series amazing – inventiveness, fun, humour, heart, wisdom, technical brilliance. Even the customary animated short about a lonely volcano who wants to find love was outstanding.

Most of the movie takes place inside the mind of Riley, a hockey-loving 11-year-old girl, where Riley’s five primary emotions – Joy, Sadness, Fear, Disgust and Anger – guide her life from a kind of a control centre. Until now, the bossy if well-meaning Joy has been pretty much in charge, but their world, as well as Riley’s, is turned upside down when the family relocates from Minnesota to San Francisco. Sadness, who until then had been skulking around on the edges like the least popular kid in school, finds herself trying to come to the front without really knowing why, which in turn makes Joy edgy. Things really turn hairy when both Joy and Sadness are inadvertentely hurled out of the Headquarters into the far reaches of Riley’s mind, leaving Anger, Fear and Disgust in charge. The story is about Joy and Sadness trying to get back before Riley’s life is ruined by bad decisions, but it’s also about Joy coming to terms with the new role she must play as Riley grows up, and learning that the role of Sadness in Riley’s life is just as vital as hers, and in fact has always been.

There’s so much sheer inventiveness on display during Joy and Sadness’ adventures that it’s impossible to list every single thing, but my favourite bit was probably the area of Abstract Thought, where the characters are transformed into cubist blocks and then almost get deconstructed out of existence. I don’t know what kids would make of that scene because the ideas there would be way above their heads. Another standout which I didn’t expect was the character of Bing Bong, Riley’s old imaginary friend who now has nothing much to do except look back at the memories of their adventures back when Riley was a toddler. He starts off as a rather cartoonish and slightly irritating character, but his part in the story is crucial and probably the most moving. Some of the film’s funniest moments happen when we briefly visit the minds of the other characters – Riley’s parents, bus driver, even a dog and a cat. I thought it was a nice touch to show how, in the more balanced adult mind, the emotions work so much more effectively as a team.

The voice work is stellar across the board (Agent Cooper is Riley’s Dad? Cool!), but the special mention goes to Amy Poehler, who voices Joy. She’s got probably the toughest job of creating a character who is constantly optimistic, enthusiastic, excitable and happy without making me want to throttle her (being an introvert, I naturally gravitate to a quiet observer like Sadness). Even at her perkiest, Joy is always endearing rather than annoying. As the film’s narrator, she also has to deliver tons of exposition, without making it sound like exposition, and she pulls it off beautifully. Phyllis Smith also does a wonderful job giving shade and depth to Sadness, a character who easily could have been very monotone.

My only nitpick (because I have to pick at something) is, why couldn’t they just use the clouds to go back to the Headquarters? I guess clouds to this movie are what the eagles are to the Lord of the Rings trilogy, haha.

*Actually, as much as I loved it, there was something in The Incredibles that bugged me. There’s a scene near the end where Dash, the kid with superspeed powers, finally gets to participate in a running competition, and just before the end he deliberately slows down and gets a second place. You’re obviously supposed to see it as a happy compromise, which always struck me as total bullshit; it devalues both Dash’s powers -and- the victory for the winner. As much as the movie wants a happy resolution, superpowered beings have no place competing with the regular people.