1. Behemoth (The Master and Margarita by Mikhail Bulgakov)

This list is not really in an order of preference, but Behemoth is probably my favourite fictional cat, and not just because I’ve read this book about 50 times over, in both Russian and English. He’s an enormous black cat who accompanies Satan on his visit to Soviet Moscow in the 1930s, and provides some of the novel’s best humourous passages. He walks on two legs, has a fondness for sarcasm, pistols and vodka, but is polite enough to offer to pay for the tram ride. What’s not to love?

Greebo is a scarred, one-eyed, evil-tempered cat belonging to Nanny Ogg, one of the witches residing in the kingdom of Lancre. Despite her insistence that Greebo is just a big harmless softie, he makes local wolves shake in their metaphorical boots, has once eaten a vampire (while in bat form), and is probably the male ancestor of every other cat in the kingdom. In one of the books, he was briefly turned into a human, who was pretty much a human equivalent of Greebo the cat: a handsome swaggering bandit with a certain greasy charisma that makes women swoon. Greebo doesn’t have the gift of speech, but he sure does have presence. If you ever had a secret suspicion that cats are just selfish bullies who fooled the humans with their sense of style, Greebo pretty much embodies that. But he is awesome despite that… which probably proves the point above.

There are a few onscreen versions of this mischievous character with a famous grin, but my favourite was always the one in the classic Disney animated film. Maybe because he’s so trippy: I mean, pink and purple coat? 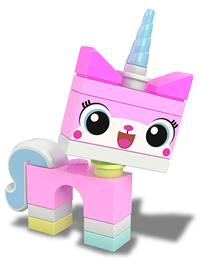 She’s part-unicorn and her exact species is debatable, but who cares when she’s so damn adorable. Princess Unikitty is all about fun, happiness, rainbows, harmony, positivity, and keeping the negative thoughts deep down below where they never ever EVER get out. Naturally, in the end she turns into an unstoppable vengeance demon once her buttons are really pushed. 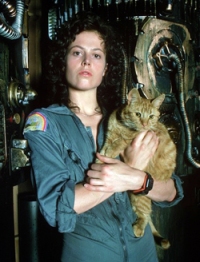 5. Jonesy and Spot (Alien & Star Trek: The Next Generation)

Cheating, yeah, but they’re both gingers and sci-fi.

Jonesy doesn’t get all that much to do in Alien but he’s got some memorable moments nonetheless, and also serves to bring out the softer side in Sigourney Weaver’s Ripley. I have to confess, I think that the dated special effects really bring that movie down; I got to see it as a double feature with Aliens once, and the cinema’s audience absolutely roared with (affectionate) laughter at the moments which were supposed to be terrifying. Still, when it doesn’t depend on special effects and instead relies on building suspense and atmosphere, the movie is still effective as heck. I always found the moment in which the camera zooms in on Jonesy’s impassive feline face while a crew member dies horribly offscreen incredibly creepy. 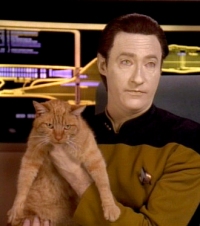 Likewise Spot is probably more memorable for how he/she affects the show’s characters (and probably for mysteriously switching genders at some point in the final season when they started to refer to Spot as “she”). One of the funniest moments on the show is Ode to Spot, a poem which Data composes for his pet – it sounds exactly like something an android would write.

There were many wonderful animated films when I was growing up in Russia, and one of my favourites was this series based on popular children’s books by Eduard Uspensky. Matroskin is a talking cat who sets up a house in a village with Sharik the dog and Uncle Fyodor, a six-year-old boy. Matroskin is a serious, practical individual – his advice to Uncle Fyodor when they first meet is to eat a salami sandwich upside down so it’s tastier.