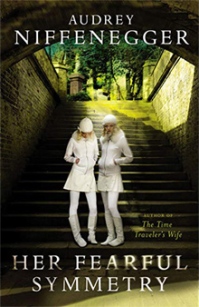 There was a lot to like about this flawed but compelling follow-up to The Time Traveler’s Wife, Niffenegger’s phenomenally successful debut which must feel like both a blessing and a curse to its author. In a way, Her Fearful Symmetry feels like a time-travelling real first novel, promising a genuine talent who hasn’t quite figured things out yet. I enjoyed the setting and the atmosphere, the characters and their relationships, the story however is where I thought the book stumbled quite a bit.

At the heart of the novel, there are two sets of twin sisters. Elspeth Noblin and Edie Poole are the older British pair, who spend years without seeing each other after Edie elopes to the USA with Elspeth’s fiancée. Valentina and Julia are Edie’s American daughters in their early twenties, who inherit Elspeth’s London flat after she dies of cancer. They are also mirror twins; in addition to symmetrical facial moles, Valentina’s heart sits on the right side rather than the left, which leaves her with a number of serious health problems. Appearance-wise, the twins resemble apparitions from a ghost story: thin and pale, with white-blond hair. With no impetus to earn their own living, the girls are cocooned within a state of extended adolescence, inseparable from each other. Though Valentina, the more timid sister with at least a nascent ambition of becoming a fashion designer, begins to visibly chafe at the bonds of twinhood.

Once the twins arrive at the flat in a building that borders on London’s historic Highgate Cemetery, they become acquainted with their eccentric neighbours. One of them is Robert, Elspeth’s grieving younger lover, who is writing a sprawling tome on the history of Highgate and becomes torn between his older love and attraction to what looks like her younger reincarnation. Another is Martin, a middle-aged creator of crossword puzzles with an estranged wife living in Amsterdam, whose extreme Obsessive-Compulsive Disorder confines him to his flat. The most surprising acquaintance however is Elspeth, whose body rests at the Highgate while her spirit is trapped within her former flat. Some of the book’s most entertaining passages deal with Elspeth becoming a stronger ghost: first barely a mist, then learning to take on a shape, exercising her ghostly muscles moving objects, experimenting with writing in dust.

Highgate Cemetery and its surrounds come vibrantly alive in this eerie story, and, together with the twins’ flat, make for a gothic-flavoured setting where the characters’ at times extreme and fantastical decisions feel rather at home. Love, separation and entrapment are big themes of the book, playing out in different ways with different characters. Niffenegger’s writing is wonderful and the novel is always engaging despite the slow-burn pace where nothing much really happens for big chunks of the novel.

Her Fearful Symmetry does come with its share of flaws, some minor, some glaring. There are two Big Twists late in the story, one of them shocking, nicely foreshadowed and extremely effective, another so perplexingly inconsequential to the goings-on it’s not clear why the author even bothered including it. While Martin is a likeable character with an affecting storyline, his subplot doesn’t quite gel with the rest of the novel and the overall impression is that of two completely separate ideas for a book squeezed into one narrative. The ghost lore gets a tad too silly and comic-booky in the closing pages, and there are instances where the novel takes frankly implausible turns in order for the story to progress. The chief offender is the instance where Julia fakes OCD in order to procure the medicine that she intends to slip to Martin. In a book that’s otherwise very well-researched, that was a definite huh what.

Despite these blemishes, Her Fearful Symmetry clearly was written with a great deal of care and love, and there’s a lot to recommend about this haunting ghost tale.