Definitely an odd one out for me, but it’s been ages since I’ve been to a big flashy show, and this concert was a fun night out and everything you’d want from an arena pop spectacular. Dancers, costume changes, flying props oh my!

I remember hearing I Kissed A Girl back in 2008 and thinking, oh look here comes another one-hit wonder. A too-hasty dismissal, since rather than disappearing into one-hit wonder purgatory Katy Perry went on to rack up an impressive string of hits and became a bona fide pop royalty in the process. I can’t say that I’ve ever been a huge fan (though I do love the wistful pop perfection that’s Teenage Dream), but when my Mum got hold of cheap tickets to the Melbourne show I thought, why not. Mum ended up passing her ticket onto my sister, who got a night off parent duties.

I wasn’t surprised to see a lot of teenage girls at the venue (some accompanied by suffering dads), but I didn’t expect to see so many little kids, some as young as six or five. I guess a Katy Perry concert is overall a pretty wholesome, colourful entertainment you’d take your child to, an odd adult moment here or there notwithstanding. I was fully resigned to a crappy side view from our discounted tickets, but to our surprise our seats, while naturally at the very top of the arena, were right opposite the stage with a great view.

The eye-popping spectacle began with the very first song and never relented, with every number accompanied by some creative visual gimmick and dazzling set designs that drew on pop art, 80s video games, Alice in Wonderland and so on. My favourite moment was when the arena transformed into a solar system with “planets” suspended from the ceiling, while Katy Perry flew around sitting on a Saturn-shaped prop wearing a sparkly silver outfit. The backdrop to it all was a giant screen in the shape of an eye that displayed everything from trippy spacey visuals to Perry’s childhood photos. 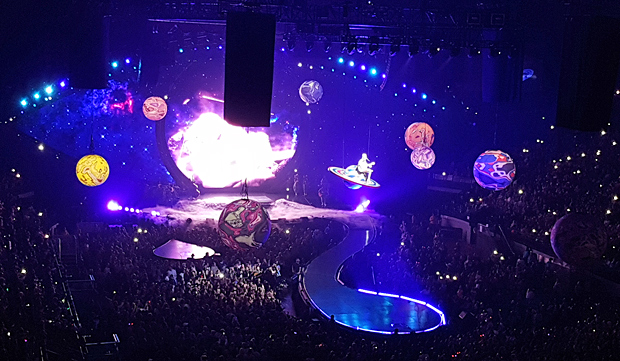 The setlist of course had all the big hits and crowd favourites and Perry’s live vocals were top-notch. Her onstage persona is maybe a teensy bit too over-the-top for me, but there’s no denying that she’s a fabulous, distinctive pop star who is never drowned out by the visual overload around her. She buttered the audience up professing her love for Melbourne as her favourite Australian city, which one can’t help but be sceptical about, but thanks anyway. A couple of interludes, one involving a shark costume and another a basketball game, dragged on for too long, but still, the energy of the show never dipped. The encore finished in a grand style with Firework, accompanied by, yeah, fireworks. I love my small intimate gigs, but sometimes it’s great to go to a big fat arena extravaganza and Katy Perry puts on a pretty awesome show.