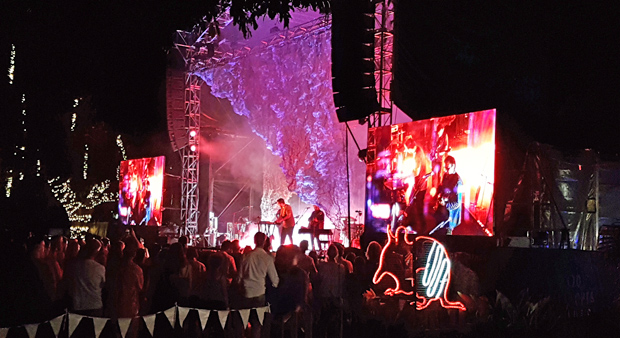 No I’m not talking about the large subspecies of brown bear inhabiting North America, but rather the American indie rock band, whose live show at the Melbourne Zoo grounds I got to enjoy.

I ended up at this gig thanks to my Mum, who got the tickets for us both and bravely took a chance on a band she wasn’t really familiar with. I have one Grizzly Bear album in my collection, Veckatimest back from 2009, and while I quite like it I never felt compelled to investigate their musical output further. They have a kind of intricate, ornate, layered sound that’s a tad folky and a whole lot of arty (my Mum’s initial impression of their music was “blank verse”), and the lead singer has a good voice, though not a particularly strong or distinctive one. The main appeal was a chance to listen to live music in an outdoor setting.

The Friday night traffic to and in the city was absolutely horrendous and soul-destroying, but we arrived soon after the support act had started and arranged ourselves on the picnic rug to the left of the stage. For some reason nobody at the entrance bothered to check our tickets, and while there were plenty of security staff milling around none of them noticed our lack of orange wristbands. Lift your game, Melbourne Zoo security!

The weather is what often makes or breaks this kind of outdoor concert, and we couldn’t be happier with the calm, clear, reasonably warm early autumn evening we got. Eventually we moved to another spot where the view of the stage and the sound quality were much better. The stage design was simple but effective – curtains of web-like fabric that made the stage look like an enchanted forest (in my opinion), or a cave (according to Mum). It looked fantastic, especially when bathed in dramatic lights of blue and red.

The music was much more muscular and punchy than on the record; though not exactly full of singalongs and catchy tunes, surrendering to its meandering flow was a nice experience. Two Weeks, probably their prettiest and more conventional song, easily drew the biggest response from the crowd; I enjoyed all the other familiar tracks off Veckatimest as well as the songs I didn’t know before. Overall, a great way to spend a Friday night, and I might finally look further into Grizzly Bear’s back catalogue. And visit the Melbourne Zoo bear and other critters one of these days, as well.