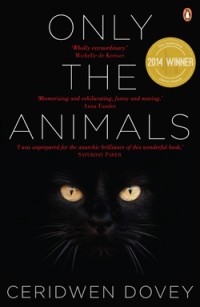 I’ve always loved short stories and this collection certainly has a unique premise. Each of the ten short stories is narrated by a soul of a different animal caught up in the human conflicts of the last century, and ends with the tale of their deaths. Among them is a female cat surviving in the trenches of World War I, who reminisces about her life with her bohemian actress owner; a bear slowly starving to death in the zoo of the war-torn Sarajevo; a tortoise who crosses paths with several literary geniuses and dreams of travelling to space; a young mussel who goes on a road trip Kerouac-style.

I confess, it took me some time to get used to the concept of the book and read it on the author’s terms, because initially the idea struck me as painfully contrived. I’ve read a few from-the-animal’s-point-of-view books before, but Dovey’s stories ask you to accept her animals as incredibly self-aware, articulate and literate creatures who care about the beauty of a piano and the poetry of Sylvia Plath. As such they felt to me more like human consciousness forced into an animal shape, and the words coming out of their mouths came off as very unnatural. It’s not really a book to make me think about the humans’ treatment of the real-life animals when they’re anthropomorphised beyond recognition.

However, once I finished a couple more stories and got over this contrivance, Only the Animals turned out to be a beautifully written, original, inventive and empathetic treasure trove of a book that’s completely devoid of excessive sentimentality or cutesiness animal stories can sometimes fall into. The book is also not preachy in some sort of overt “animals = good humans = baaaaad” kind of way. The animals remark on the humans around them in a frank, matter-of-fact manner; sometimes they’re bemused by them, sometimes they’re horrified, and quite often they’re sympathetic.

Since every story ends with the death of its main character, they’re inevitably poignant and tragic, but they also can be quite playful and witty; the story of the mussel in particular comes closest to the outright parody and feels slightly different in tone to the others, in a good way. What binds the stories, other than the themes of violence and human cruelty, is the literary connections: famous writers like Tolstoy, Virginia Woolf and George Orwell sometimes appear in a story as the background figures, or it’s their work that has inspired the animals in some way; or the author uses an existing work (such as Kafka’s A Report to an Academy) as a jumping off point for her own story. I’ve probably missed out on some of the references and homages to past writers, but I don’t think this knowledge is necessary to enjoy the stories on their own.