I held on to my old Nokia 3310 phone for ages, long after almost everyone I knew switched to smartphones. I swear that thing was like a Chuck Norris of phones – it survived a drop into a rain-filled gutter and the battery lasted for something like eight years. I was keeping it around partly out of fascination with its long life, even after most of the numbers on the keys became almost invisible from use. Plus, I have to admit, despite being generally easy-going I have a stubborn streak that randomly shows up here and there, so when somebody tells me that I just have to get a smartphone my impulse is to dig in the heels.

Anyways, eventually it spluttered and died, so I thought it was time to get myself a smartphone. I smugly picked myself an inexpensive plan, because, ha hah, I wasn’t going to be one of those people who can’t ride two floors down in a lift without whipping out their phones and burying their noses in their evil glow. Nope, I was only going to use it for calls and messages and only use internet when absolutely needed. Good plan.

Well I haven’t yet sunk so low as to get my phone out during a lunch with my Dad or something, but I really underestimated the powerful pull of having so much information and all my regular internet haunts so readily available. It’s insanely addictive. Waiting for a latte at my local cafe? Check the phone because obviously the two minutes of waiting are just too unbearable not to be filled. Too lazy to switch on the tablet at home? Reach for the phone instead. Phone began to replace my reading at night and I’d only half-watch the TV programs I was actually interested in because of the phone. Phone time instead of listening to music and people-watching on the train. Phone instead of morning news while eating my breakfast. Even extra payment for exceeding my plan is no major deterrent – what’s extra $10 per month after all?

This has to stop… so here are the rules: 1) Absolutely no phone in the bedroom, especially at night. 2) No phone on the train – it makes me feel motion sick anyway. 3) Checking the phone while sitting in a cafe by myself = fine. Checking the phone to fill in every single short gap in time = not ok. 4) No splitting between the phone and TV programs I’m genuinely interested in watching. It’s amazing how much more enjoyable they are if you give them your full attention instead of 30%.

With luck and willpower I shall avoid this fate: 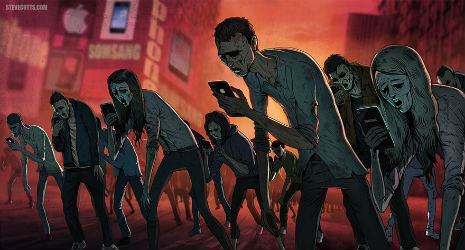