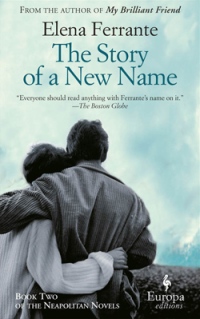 The second entry in Ferrante’s Neapolitan Novels is just as good as the first one, if not better. It continues to chart the stories of Elena and Lila, the two young girls from Naples, as they enter adulthood, and the course of their relationship which is far too complicated to be referred to as friendship.

At the end of the last book, Lila appears to have hit a jackpot, escaping the poverty of her childhood through a marriage to Stefano Carraci, a prosperous shopkeeper, and becoming a glamorous Jackie O of the neighbourhood. That perfect image doesn’t last for long when Lila finds out that her new husband is not the man she thought he was, and comes back from their honeymoon with a bruised face. The novel portrays the casual domestic abuse and rape, in a society that takes it for granted that a man must subdue his wife in any way possible, in a stark unflinching way that truly makes you wince. Meanwhile, Elena, or Lenú as she’s most often called, continues to plod along with her studies and pine after Nino, the older student intellectual from the neighbourhood who doesn’t return her affections.

Lila and Lenú’s love-and-hate relationship remains the heart of the series, and Ferrante has a marvellous way with exploring the nuances and complexities of the female friendship. As much praise and success Lenú achieves with her studies, she can never escape the nagging feeling that she is in some way a fraud, and that Lila is still the truly brilliant scholar of the pair even though she quit school and remained stuck in Naples. When, later in the book, Lenú becomes a published author, her elation is soured by the realisation that the heart of her book, and the indefinable quality that drew people to it, came from Lila’s short story she’d written as a child. In the matters of the heart, Lenú’s passivity condemns her to sit on the sidelines looking on while Lila boldly goes for what she wants, no matter the cost. She can’t escape Lila and her strange charismatic pull even after making a conscious attempt to sever ties and move on. Lila’s jealousy of her friend is less obvious, but there’s a telling episode where she comes along to her friend’s professor’s gathering, and is ignored while Lenú is roundly praised, which causes her to lash out at Lenú in a truly hurtful manner that, as Lenú realises later, covers up Lila’s own hurt.

The novel also explores more social themes, as Lenú’s path takes her further away from Naples and the fate of the women in her neighbourhood she wants so badly to escape:

I saw clearly the mothers of the old neighborhood. They were nervous, they were acquiescent. They were silent, with tight lips and stooping shoulders, or they yelled terrible insults at the children who harassed them. Extremely thin, with hollow eyes and cheeks, or with broad behinds, swollen ankles, heavy chests, they lugged shopping bags and small children who clung to their skirts. They had been consumed by the bodies of husbands, fathers, brothers, whom they ultimately came to resemble, because of their labors or the arrival of old age, of illness. When did that transformation begin? With housework? With pregnancies? With beatings?

Blending into her new world of middle-class intellectuals is however a painful task – Lenú sheds her Neapolitan speech for a more cultured Italian, changes her clothes, even catches the eye of one of the affluent fellow uni students, which seems to grant her some extra legitimacy. But she remains an outsider in this world, realising that, no matter how hard she studies, she’ll never have the qualities the people born into this social circle naturally have. While back home she is a stranger – her family are proud of her but can’t understand or relate to her.

Ferrante’s writing is at once easy to read, and has the density that makes it impossible to just gallop through the book, even for a fast reader like me. It’s a sort of book that deserves and rewards careful and slow reading. Once again, I can’t wait to keep on reading about these two damaged, extraordinary women.