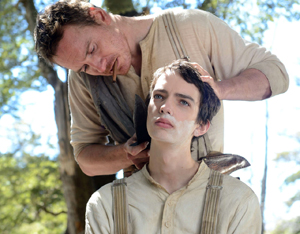 Caught the encore session for this movie today at Palace Cinema Como. I’m not usually a fan of westerns, but this one looked more offbeat and interesting plus I’m very partial to Michael Fassbender. Because I’m not into westerns I probably missed out on tons of references and tributes that the genre enthusiasts would pick up on and appreciate, but I really enjoyed it nonetheless.

The story is very simple: a young Scottish boy from a well-off family, Jay Cavendish, is looking for his missing love Rose in the wild, lawless territory of Colorado. On the way, he meets and hires Silas, a rough gunslinger who’s rather more equipped to survive in the wilderness than Jay, and who also has his own reasons for helping the boy. On the way, they meet all sorts of colourful and/or dangerous characters, often with unpredictable results, and run into some sticky situations.

The film has a very distinct atmosphere (helped by a wonderful score), and it’s the kind of movie where you either fall under its spell and go along with the characters’ journey, or you sit there twiddling your thumbs thinking, when is something going to happen? Luckily I was very much in the former club. I love it when a film captures a sense of place and time, and I definitely felt it here: the vastness of the plains and the starry sky, the slower pace of life, the casual violence and brutality of the times. There were a couple of moments when the setting looked a bit too obviously like New Zealand (where the film was shot), but otherwise I had no problem believing that this was really the 19th-century Wild West. There were also great moments of quirky humour, including what has to be the funniest clothesline ever.

Fassbender (who channels Clint Eastwood here quite a lot) is immensely watchable and entertaining as tough and laconic Silas, but the heart of the film belongs to Kodi Smit-McPhee as Jay. He was fantastic in the otherwise underwhelming adaptation of The Road, and he gives a soulful, moving performance here. He’s got unique, enchantingly strange looks – it will be interesting to see what he grows up like. It was fun spotting some familiar faces among the cast; Rose is played by an Offspring regular Caren Pistorius and it took me a couple of scenes to figure out why the guy who played her father looked familiar: The Hound from Game of Thrones! Hell yeah!