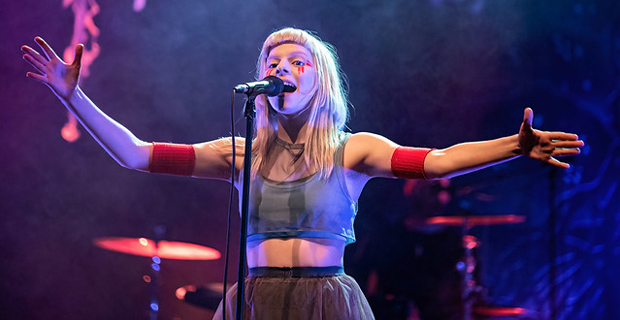 I’m glad I took a gamble with this young Norwegian singer. I’m very selective with my live gigs these days, and normally I’d hesitate to spend money on someone whose music I don’t know very well, but I just had a good feeling about this one.

I’m pretty sure they played some of Aurora’s stuff on Triple J, but she came to my attention when I randomly stumbled on her song Churchyard on YouTube and instantly fell in love with its gorgeously haunting sound and Aurora’s remarkable voice, pure and clear as a mountain stream. It’s high and angelic but not wispy, at times there’s a powerful kick to it that’s reminiscent of singers like Florence Welch. The other songs I listened to weren’t quite as revelatory, but suggested a solid body of work for someone so young, and with enough diverse elements (including folk and electronic) to be interesting. I also thought that she had an enchantingly otherworldly look to her like some fairytale wood creature, which is always a plus in my book. I love my eccentric female artists who are a little bit from another planet.

This gig happened at the end of a very tiring week, with me battling the cold and deadlines at work, so my thought on the night was, please be good and don’t make me wish I was snuggling on my couch watching TV instead. I knew that Aurora could sing, but from past experience you just don’t know if someone can cut it live and be a compelling performer.

Luckily, any doubts I had were quelled the minute Aurora hit the stage and opened the show with Churchyard. It was instantly obvious that she’s a kind of energetic performer who throws herself 100% into the show; not only were her vocals immaculate, but she was also utterly adorable to watch, dancing, twirling and shaking her mop of white-blond hair, and engaging in charmingly awkward banter in between the songs.

My respect only increased when, after a couple of songs, Aurora told the audience that she was quite sick and sniffly but didn’t have the heart to cancel the gig, and apologised for her singing. To be honest, if she struggled with her vocals, it only became noticeable at the very end of the night. I wish I had this much energy when I’m unwell. The Forum was a perfect setting for Aurora’s dreamy and emotive music, and the big floating jellyfish decorating the stage were a nice touch.

Judging by the crowd response, Aurora had amassed a very enthusiastic fanbase here in Melbourne. The audience around me (overwhelmingly youngsters in their early 20s) were quiet during the slow understated songs, and singing along with the bouncier dancier numbers. It was lovely to experience such a happy atmosphere and watch such a genuine, exuberant performer.