Intoxicating genre-hopping pop by a Colombian-American singer; live album from an experimental folk band that delves deep into the Nordic past; vintage sound and a genuinely great voice.

This girl is a wonderful musical magpie, effortlessly blending modern pop/R&B with retro styles to create a delicious musical cocktail of an album. Moving between bossa nova, funk, soul, latin rhythms, 60s girl-group sound and more, Isolation is a fun and varied record held together by Uchis’ strong sense of personality and attitude. I’ve listened to so many pop records that start off strong only to fizzle out midway, it’s refreshing to see an album hold up from start to finish. Languorous Miami, my favourite track, sounds like something you’d want to play while driving around yes, Miami.

Many artists talk about “going back” for musical inspiration, but this Danish-German-Norwegian folk group beats them all, going back all the way to the Viking era and Northern European Iron Age. Their primal, percussive, hypnotic music is inspired by the original ancient artifacts and texts, and uses the clang of swords, drums and even human bones (legally obtained, I presume). I have the YouTube algorithm to thank for stumbling on a video of their live show, which certainly looks like an out-of-this world, out-of-this-time experience, with the group and their supporting musicians all decked out in ancient costumes and bearing shields and spears. Since my chances of seeing them live are close to nil, the next best thing is this live album, recorded at the Netherlands festival Castlefest. 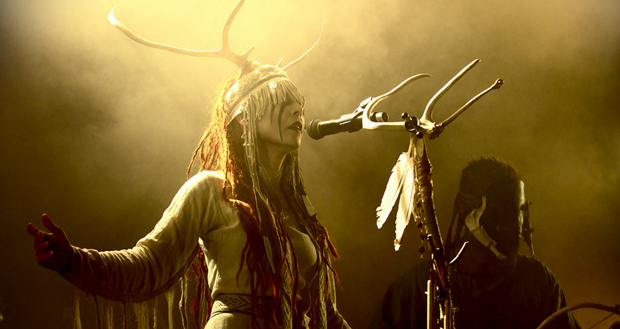 The most compelling part of Heilung for me is the female singer, Maria Franz, whose crystalline otherworldly voice goes from ethereal to earthy with the skill worthy of Lisa Gerrard, and who looks like a bewitching forest spirit onstage. She makes for a great contrast with the guttural style of the male vocalist, who sounds like a Mongolian throat singer raised on metal. In fact the heavier parts of Lifa sound like they wouldn’t be out of place at a metal festival.

A great voice can really make or break an album. This would have been a pleasant, warm but unremarkable dinner party record, if not for Molly Burch’s smoky marvel of a voice that gives every line she sings depth and nuance. You get a feeling that if she was to sing out a phone book, she’d still find a way to do it with versatility and style. Musically, you could maybe criticise First Flower for offering little variety, never straying far from a country/ballad/50s bar music blend, but it matters little when the overall effect is so charming and personable.

In contrast to the breezy sound, Burch’s lyrics often deal with anxiety and self-doubt, though the standout track To The Boys is defiant about staying true to herself: I don’t need to scream to get my point across / I don’t need to yell to know that I’m the boss. She probably means it in a feminist sort of way, but it’s also a relatable sentiment for an introvert.