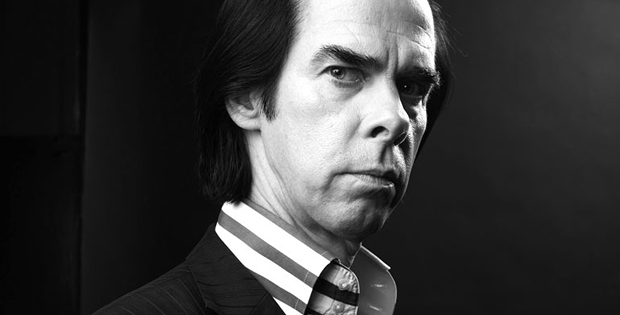 I have my friend and fellow fan to thank for a chance to attend this very special and unorthodox event involving one of my all-time favourite artists. I’ve lost count of how many times I saw Nick Cave live, but this speaking tour, with Cave candidly answering unpredictable questions from the audience and performing picks from his enormous back catalogue on the piano, was something very different.

This past Sunday is always going to remain a very surreal memory for me. My Dad passed away almost two weeks ago, and on Sunday morning I went with my sister to the serene pine woods near Woodend to scatter the ashes, a ritual which undoubtedly helped with gaining a sense of closure. So I went from scattering my Dad’s ashes in the morning to sharing the stage with Nick Cave in the evening.

When friend and I arrived at the Town Hall at around 7.30, we learned some bad news and some awesome news. The bad news was that my friend mixed up the starting times and we were half an hour late and had to be quietly escorted inside. The amazing news was that, without realising, he got us the best tickets in the joint. Probably for the purpose of breaking the barriers between the performer and the audience, and creating a greater sense of intimacy, they brought small round tables and chairs right onto the stage where Nick Cave and his piano were, so he was mere metres away from where my friend and I sat. To say we were stoked beyond words is an understatement.

As Cave explained, the aim of this tour was to step away from the comfort of the Bad Seeds and bring back the sense of terror into the live shows, as well as building a greater connection with the audience. So, in between the musical performances, it was Cave answering unfiltered questions from the crowd, who indicated themselves by what I preferred to think of as red lightsabers. The questions covered a vast array of topics and ranged from thoughtful to cringey to the guy who asked Cave his opinion on the movie Dogs in Space (there’s always one). As a subject of scrutiny, Cave unsurprisingly showed himself as articulate, frank and even funny, in a dry laconic kind of way. Many of the more personal questions revolved around the recent death of his son Arthur and getting through the loss that, in Cave’s words, left him with a sense of complete obliteration. He was obviously prepared to address it and talk about emerging on the other side of grief.

As if the night couldn’t get more surreal, at one point a strangely familiar voice said, hi I’m Florence, and it took me a couple of seconds to realise that the next question was coming from none other than Florence Welch of Florence + The Machine, who was in the audience.

I couldn’t memorise all of the questions and answers, so here are some random insights:

Though Cave spent the three hours talking rather than playing, he also treated the audience to some sublime solo piano renditions. My emotions ran very close to the surface for these last few days, so I think I was teary-eyed and sniffling half of the time. I expected the song selection to be more random, but Cave mostly stuck to the well-loved favourites like The Ship Song, Into My Arms, Papa Won’t Leave You, Henry and of course The Mercy Seat. The more recent songs included the haunting Mermaids and a surprising reinvention of Higgs Boson Blues, which I’d never pick as a natural choice for a piano. My friend and I had discussed what cover Nick Cave was likely to play if he was to play any, and we both agreed on Leonard Cohen. Our instincts were correct – he performed a beautiful cover of Cohen’s Avalanche.

Though the quality of questions varied, the event made for a fascinating insight into what makes Nick Cave tick. I couldn’t think of any intelligent question I wanted to ask; though I joked to my friend that maybe I should have asked Cave if I could have some of his water for my parched throat, since we didn’t have time to buy any drinks before the show.