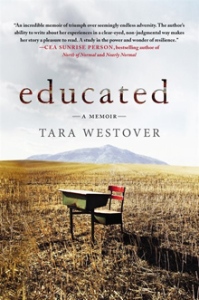 Our latest book club reading was this extraordinary, beautifully written memoir about growing up in rural Idaho in a family of Mormon survivalists.

One frequent comment in the discussions I had was that to many Educated felt like reading fiction rather than a memoir. This is in no way a swipe at its credibility, but rather a compliment to the quality of Westover’s writing, which is a few notches above your typical memoir or autobiography. The impression could also be partly due to the voice of the narrator, which is rather distanced, matter-of-fact and remarkably perceptive. Perhaps it comes from looking back at a life that feels like a different life altogether. In many ways, this memoir is a book about memory and its fragility, and trying to piece together a portrait of the family from the often contradictory recollections.

Westover was born on a remote mountain, and wasn’t issued a birth certificate until a few years later. Her father Gene’s extreme beliefs went well beyond the demands of his religion (later, Westover came to suspect that her father had a bipolar disorder). In his paranoid mind the End of Days was always at hand and the government was out to get you, therefore he was determined to be completely self-sufficient and isolate his family from the mainstream medicine and education system. While his wife worked as a midwife and practiced herbal healing, Gene owned a scrap yard where his children, including Tara, were put to dirty and dangerous work with a shocking disregard for safety. A few accounts of the horrific accidents made me feel grateful for not having much of a graphic imagination. Other episodes of physical and psychological violence suffered by Tara at the hands of her unstable brother Shawn are equally confronting.

Reading about Westover’s isolated childhood, it often came as a jolt to be reminded that it in fact took place this century with the references to the 9/11 attacks and internet, and not in some godforsaken times way back when life was brutal and cheap. Incredibly, despite receiving no formal schooling, she set on a path that, through sheer determination, took her all the way to the university, and effectively amounted to a rebellion against her family’s beliefs. What permanently severed Westover from her parents, though, wasn’t ultimately her choice to be educated, but a decision to break the silence and speak up about the abuse within the family. Some invisible rules are simply not to be violated.

This is however no bitter, settle-the-score sort of memoir. While pursuing the education at the university and later overseas, Westover can’t help but miss her mountain home. There are softer moments in the book, such as when Gene’s fundamentalism buckles under the beautiful sound of his daughter’s singing in local stage productions. Though her parents’ ways are in the end intolerable, Westover finishes the book with the hope of reconnecting with them one day, and her love seems to survive despite the cruelty and neglect. The book is also a reminder that true education is not merely about memorising facts, but a way of learning to think critically about the world and oneself.