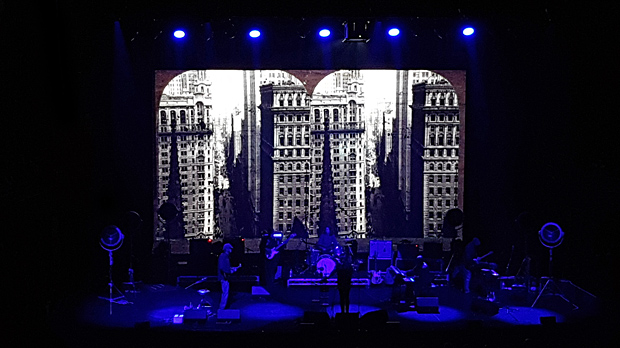 A highlight of our recent whirlwind trip to Sydney, this concert was a surprise birthday present from my Mum and a total musical blind date for me. Other than the band name and a vague association with the 90s, I knew literally nothing about Mazzy Star and couldn’t name or hum a single song. Luckily, their live show made for a wonderful night out.

The Sydney Opera House is such a marvel it automatically lends a special aura to the occasion; I’ve been to Sydney many times now but it never ceases to be anything less than breathtaking (as a Melbournian it also makes me feel rather envious for the lack of a similar iconic landmark). For some reason I assumed that there wasn’t going to be an opening act, but the guest for the night was Gareth Liddiard, the frontman and chief songwriter of The Drones, a band whose musical output for me ranges from raw and powerful to dirge-like and tedious. It was however great to hear a stripped-down version of Shark Fin Blues, a song I genuinely love. He definitely got more love from the audience than your average opening act.

After the short break, it was time for the main event. It turned out that Mazzy Star’s claim to fame is a kind of gentle dreamy pop, woozily tuneful and very lovely, with female vocals that bring to mind a more chilled out Martha Wainwright. Some songs had a tinge of country/blues, and a couple ventured into full-on psychedelic weirdness; I probably wouldn’t have wanted a full two hours of these but they were welcome breaks from more conventional and straightforward songs. They were accompanied by simple but effective imagery, mostly black-and-white, projected onto the big screen.

Other than a few moments when the light show briefly caught her face, the lead singer remained hidden in the shadows, prompting a couple of show your face! comments from the audience who probably craved a bit more personal connection. Her banter likewise didn’t extend much beyond a few timid thank yous. Ah well, not everyone is a natural entertainer. For some people the onstage banter is a make-or-break thing, but for me it’s more like a nice bonus, and its lack didn’t detract from a very enjoyable evening.