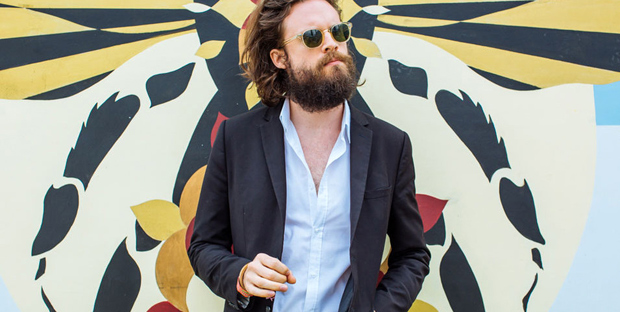 I really liked I Love You, Honeybear, the second album by Father John Misty (real name Josh Tillman), silly title and all, so when I heard he was touring Melbourne I jumped at the chance to see him live. Besides, Forum Theatre is probably my favourite music venue in Melbourne and it’s always nice to be there again under its fake starry sky.

I arrived soon after the doors were opened and bagged a seat at the back of the venue. The opening act was ok, pretty standard singer-songwriter stuff with observational lyrics about everyday life, although I’m pretty sure that one of his songs ripped off Don’t Let Me Down by The Beatles. By the end, I decided that I wanted to come closer to the front after all, partly because the two spots on my left got occupied by extremely talkative middle-aged British blokes – I just had a hunch that they were going to blahblahblah their way through the main act too.

So I had a great spot with a fantastic view of the stage and the Forum’s gorgeous architecture, and when the show kicked off with the album’s opener I was ready to enjoy the concert with a huge grin on my face… but that never happened, sadly. There was nothing to fault technically – the guy’s got a fantastic voice and the band sounded great too, yet it all felt unexciting somehow. I was amused to find out later that Tillman used to be in Fleet Foxes, because I had exactly the same reaction when I saw them live – everything sounded as beautiful as it could be but it just made me feel like there was nothing more to the concert than the songs being faithfully reproduced onstage.

To his credit, Tillman did put in an effort as far as showmanship goes, with some hip shaking and mike stand twirling and drops to the floor, but I didn’t think he quite had the charisma to back it up, and the overall effect for me was that of an annoying hipster who tries too hard. I felt so blah about the whole thing I left before the encore, which I think I’ve only done a couple of times before. I still love his music, but he’s clearly not a live act for me.