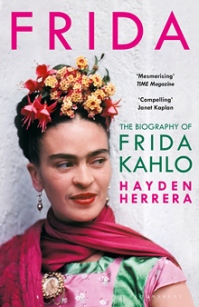 I finally got around to reading this excellent biography of Mexican artist Frida Kahlo, which I picked up, appropriately enough, during my trip to Mexico almost three years ago. I’ve been a fan of Frida’s striking, intensely personal paintings for a long time, and during my trip I was lucky enough to visit Casa Azul, the Frida Kahlo Museum in the neighbourhood of Coyoacán in Mexico City. In retrospect, I almost wish I’d read the book and got more insight into Frida’s life before the visit, but ah well.

In the preface, Herrera describes an event that perfectly encapsulated Frida’s qualities as a person and a painter: a year before her early death at the age of forty-seven, Frida made an appearance at her first major exhibition in her native Mexico. With her health badly deteriorated, Frida arrived at the Gallery of Contemporary Art in an ambulance, wearing her favourite traditional Tehuana costume, and received friends and visitors in her four-poster bed, installed earlier. It was a testimony to Frida’s spirit in the face of suffering, her love of drama and spectacle, and an extra reminder of Frida’s central subject as an artist – herself.

I paint my own reality, she said. The only thing I know is that I paint because I need to, and I paint always whatever passes through my head, without any other consideration.

Herrera’s book naturally gives a lot of attention to Frida’s art and I enjoyed the in-depth descriptions and analysis of her paintings, though it’s a tad disappointing that only half of the reproductions are in colour and the rest are black-and-white. Though she was embraced by the European Surrealists, Herrera argues that Frida’s art was far too specific, culturally and individually, to be classified as such. It was a visual diary of her life and emotions, at times full of disturbing violent imagery that reflected her real-life pain, but also displaying sensual vibrancy and even black humour. Along with her Mexican costumes, it also showed her absorption in traditional Mexican culture and folklore. Frida’s creation of her public persona was very much self-aware and knowing (early on there’s an anecdote about how she’s chosen 1910, the year of the Mexican Revolution, as her birth date rather than the 1907 date on her actual birth certificate).

It’s fascinating to think whether Frida would have become an artist at all had it not been for the devastating traffic accident that happened when she was eighteen and left her literally impaled on a metal bar in the wreckage of the bus. She could never have a child, suffering miscarriages because of her broken pelvis, and had to endure endless operations. Prior to the accident, Frida apparently had shown little to no interest in painting and took it up while bedridden afterwards.

Another momentous event in her life was of course Frida’s marriage to muralist Diego Rivera, a tempestuous union that ended in divorce followed by re-marriage. Their marriage often takes centre stage in the biography and you learn a lot about Rivera simply because of how important he was in Frida’s life. Frida’s pain was knowing that she would never come first for Rivera who lived for his work, while Diego was the most important thing in her life. Both had many love affairs; in a typical macho manner Rivera was indulgent towards Frida’s female lovers while jealous of the male ones (which included distinguished men like Leon Trotsky and the artist Isamu Noguchi). But they were well-matched too, sharing commitment to Mexico and its working people, the Communist Party, deep love and friendship and immense respect for each other’s work. While it took Frida a long time to come out of Rivera’s shadow, he was always supportive of her talent.

Behind her indomitable persona, Frida of course was rather more vulnerable and complicated, a side she only showed to those closest to her and that Herrera doesn’t gloss over. Frida’s personal letters, quoted here in full, provide an insight into her personality and voice (though I also found them a tad maddening to read because Frida often didn’t have much use for punctuation, pouring herself out in a torrent of words). Some of Herrera’s own interpretations of Frida’s art and life should perhaps be taken with a grain of salt, but then again there’s no such thing as a completely objective biography. Overall it’s a well-written, detailed book that does manage to convey the sheer magnetism of Frida the person and the artist.

2 thoughts on “Frida: A Biography of Frida Kahlo by Hayden Herrera – Book Review”