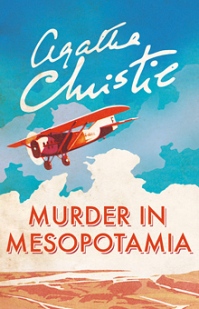 Memory is a funny thing; I could remember the setting, the victim and the narrator of this Poirot mystery, but as it turned out my memory of the killer’s identity was completely off. I pinned the deed on the wrong person the whole time I was re-reading the book and naturally, the ending had me gobsmacked.

This novel was without a doubt influenced by Agatha Christie’s own experiences in the Middle East while accompanying her second husband, archaeologist Max Mallowan. This story is set in Iraq and is narrated by Amy Leatheran, a nurse who is hired by Dr Leidner, the head of an expedition digging up a large ancient Assyrian city. For many years, his team has enjoyed an atmosphere of happy camaraderie, but now the mood has soured with the arrival of Mrs Leidner, whose presence has everyone on the edge and whose recurring fits of nerves worry her husband.

Upon arrival, Amy finds Louise Leidner a woman of exceptional, magnetic beauty and charm who provokes intense reactions from the rest of the crew. The main cause of her distress is the series of anonymous letters seemingly written by her first husband, who was presumed dead until Louise started to receive threats discouraging her from marrying anyone else. When Amy questions the wisdom of Dr Leidner hiring a nurse for his wife when a bodyguard would be a more appropriate choice, he reveals that there’s a strong reason to believe that Louise herself faked the letters. But when Mrs Leidner is found dead in her room, it looks like the threats were real after all… or were they just a clever decoy? By an amazing coincidence, Hercule Poirot happens to be on his way to Baghdad at the time of the murder, and is summoned to the dig to exercise his little grey cells and unravel the mystery.

The best things about Murder in Mesopotamia are its exotic setting and Amy Leatheran, who, though not particularly brilliant, is a very likeable no-nonsense narrator with a distinctive voice of her own and feels very much like a real person. It was fun to see Poirot through her perspective; at first Amy finds him a ridiculous-looking little foreigner, but as he comes to rely on her for assistance, she comes to regard him as a sort of top-class surgeon. Plus I always enjoy the mysteries where the personality of the victim is central to figuring out the crime.

My big problem with the book however was its large cast of woefully unmemorable secondary characters (with a couple of exceptions). There are three young male members of the expedition who remained completely interchangeable in my head even by the end of the story and I couldn’t tell you who was who if you put a gun to my head. Christie’s ensembles are usually way better than this. Also, while the final reveal is pretty ingenious and I enjoyed being surprised, it depends on the reader swallowing a fairly improbable detail. Not a dealbreaker, but a weak spot nonetheless.

P.S. I did enjoy the offhand reference to the Orient Express murders.

2 thoughts on “Murder in Mesopotamia by Agatha Christie – Book Review”